Aaron Rose (born in Portland, lives and works in Los Angeles) is an artist, film director, curator and writer. From 1992-2002 he was the owner of Alleged Gallery in New York. Rose was director of the feature documentary film Beautiful Losers, which began its theatrical run in 2008. He has directed numerous commercials, short films and movies for television. In 2011 he co-curated (with Roger Gastman and Jeffrey Deitch) the exhibition “Art In The Streets” at the Museum of Contemporary Art (MoCA) in Los Angeles. Rose has exhibited his artworks internationally and is editor of ANP Quarterly, a quarterly arts magazine. His publishing imprint, Alleged Press (Damiani), releases monographs by contemporary artists. 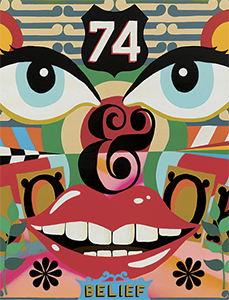 Paintings Objects Installations
2015
no text
Nieves
A series of geometrical abstractions forming symbolic totems that draw on the annals of visual history.