Kathy Acker (1947-1997) was at the forefront of transgressive writing from the Seventies until her death. Her provocative intertextual narratives—halfway between autobiography and pornography—were developed in lectures, performances and films (Variety, Bette Gordon). Her published work includes Blood and Guts in High School (1984), Don Quixote (1986), and Empire of the Senseless (1988). 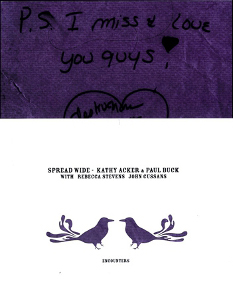