Jürg Halter (born 1980 in Bern, where he lives and works) studied at the Bern Academy of Arts (HKB). Halter is one of the best-known poets and spoken word artists of his generation in the German-speaking world. He has released several publications and has performed in Europe, Africa, Japan, Russia and the USA. He has collaborated with Stephan Eicher, Sophie Hunger, Bettina Oberli, Yves Netzhammer, and Walter Pfeiffer, among others. 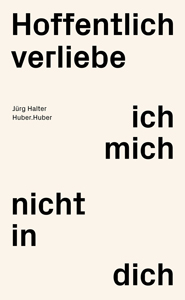