The work of Edouard Baribeaud is characterized by his bilingualism and a dual french-german cultural identity. Baribeaud has a command of the classical techniques – and delights in mixing them freely, combining seemingly incompatible styles within the same drawing. He likes to contrast the mundane with the mythical, to lead archaic figures through modern landscapes; and in doing so, to blend real personal experiences with invented memories. The fact that he likes working in extended series, with the individual drawings bearing a chronological and narrative coherence, point to this cinematic approach to drawing. He has shown internationally including solo shows at the Pavillon Blanc centre d'art de Colomiers, France,  Nolan Judin Gallery, Berlin, Lieu Unique, Nantes. 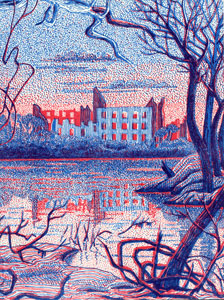