Heimo Lattner (born 1968 in Eisenstadt, lives and works in Berlin) is an artist working with film, video, performance, audio-play, room installation, installation and intervention in public space, drawing, cartography and writing. Since the late 90s he has also worked in the collective e-Xplo with Erin McGonigle and Rene Gabri, developing interventions in public space. Lattner is a founding member and co-operator of the project space General Public in Berlin. He is a guest lecturer at several universities in the fields of research-based art, public art and creative writing. 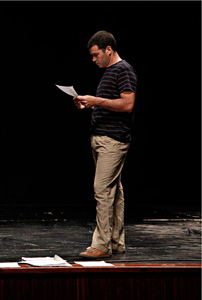 A Voice That Once Was In One's Mouth (+ CD)
2013
English edition
Errant Bodies - Critical Ear (monographs)
Six conversations recorded in Berlin between the artist Heimo Lattner and colleagues, focusing on the artist's research and practice, especially around the recurring theme of the voice, which Lattner's work queries as fundamental to issues concerning the formation of social and cultural identity.