Daniel Dewar (born 1976 in Forest Dean, United Kingdom) and Grégory Gicquel (born 1975 in St Brieuc, France) live and work in Paris.
“With a kind of evident simplicity, Dewar & Gicquel practise an offshore style of figurative sculpture that may be more or less easy to identify, but whose relation to an external referent is beyond doubt. Looked at individually, their motifs seem precise and meaningful, in that they reference cultural niches or specialist activities. But when considered globally, on the scale of their work as a whole, the sheer length of the list prevents the formation of any kind of identity kit or narrative association. Retrospectively, the succession of their motifs and the fragmentary way in which they appear makes these considerations of cultural genealogy seem anecdotal, placing them in the indistinct zone of global Pop (or sub-Pop) imagery, made to serve conceptual decisions (where it is more a question of nondescript images for figurative sculpture). In the same way, Dewar & Gicquel try out various techniques in a pure amateur spirit, working with materials, usually in their raw form, to bring out regional (or even cantonal) sources of inspiration in sculptures that are essentially ex-situ. This hand-made, the traditional refuge of self-expression, is also a space for improvised slippage, with moments of exaltation giving free rein to a kind of heroic endurance and to the arbitrary detours of an untrammelled imagination. And so this subjectivism exacerbated by practice contradicts the hypothesis of an a priori conceptual decision about the motif. The hybridisation of motifs, techniques and materials operative at different levels of their work allows an endless back and forth between the basic obviousness of the Pop imagery allied to a vernacular language and the secondary effects of a conceptual posture that is indifferent to its natural imagery and to the context of its exhibition. Their sculptures, fusing almost readymade images and almost unforeseen forms, are thus the very concrete synthesis of a position that straddles two options: an expressionist subjectivism based on an authentically Pop imaginary and a distanced figurative conceptualism.” (Emilie Renard) 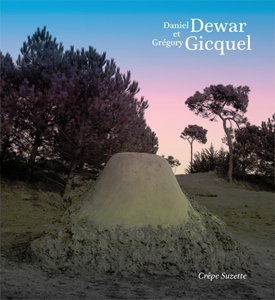