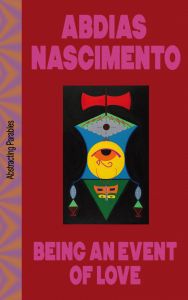 order
wishlist
A survey of the pictorial work of the Afro-Brazilian artist, writer and activist, with fifteen essays.
Published on the occasion of the exhibition "Sedje Hémon. Imran Mir. Abdias Nascimento. Abstracting Parables", as part of the international Arnhem based art manifestation sonsbeek20→24, at Stedelijk Museum, Amsterdam, in 2022.
The life and work of Afro-Brazilian painter, poet, essayist, dramatist, activist, and member of Parliament Abdias Nascimento (1914-2011) is a testament to his active commitment to Black expression and solidarity, both artistically and politically. Above all, Nascimento was a Pan-African activist. He organized the National Convention of Brazilian Blacks (1946) and the 1st Congress of Brazilian Blacks four years later. During the same period, he founded the Black Experimental Theater (1944) and the Black Arts Museum project (1950), both in Rio de Janeiro. While curating the latter, he began to develop his own creative work.
In his art, Nascimento found another space for his research into the historiographies, political concerns, epistemologies, and teleologies of African peoples, both on the continent and in the diasporas. In his painting practice, which spans over four decades, he uses myths, concepts, and aphorisms from ancient Egypt, the Yoruba's, and the Ashanti's. Together, his body of work can be seen as a compendium of aesthetic, philosophical, and political discourses on Blackness and resistance, and resistance inBlackness. In terms of style, his paintings defy categorization as either figuration or abstraction, as the gods, the human, the geometric structures, the spiritualities, and cosmogonies that he depicts, or evokes, transcend any effort to categorize.
From 1968 to 1982, he was in exile from the military regime in Brazil. During this period he exhibited widely in among others the U.S., where he also held several academic positions, such as Professor of African Cultures at the State University of New York. Upon his return from exile he founded the Afro-Brazilian Studies and Research Institute (IPEAFRO), which organized the 3rd Congress of Black Culture in the Americas (1982). Nascimento received national and international honors for his work, including the United Nations' Human Rights Prize and UNESCO's special Toussaint Louverture Award, granted to him and to poet, author, and politician Aimé Césaire in 2004 for their contribution to the global anti-racism movement.
order wishlist
Edited by Amal Alhaag, Aude Christel Mgba, Bonaventure Soh Bejeng Ndikung, Gwen Parry, Ibrahim Cissé, Krista Jantowski, Zippora Elders.
Contributions by Abdias Nascimento, Bonaventure Soh Bejeng Ndikung, Shade Mary-Ann Olaoye, Amal Alhaag, Ibrahim Cissé, Sita Dickson Littlewood, Sophie Douala, Zippora Elders, Lélia González, Keyna Eleison, Krista Jantowski, Elisa Larkin Nascimento, Aude Christel Mgba, Goia Mujalli, Kabengele Munanga, Gwen Parry, Olabiyi Yai.