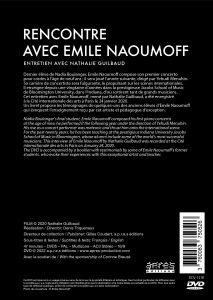 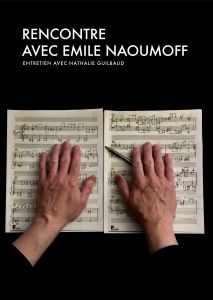 order
wishlist
A filmed interview with the pianist, composer and teacher Émile Naoumoff, conducted by Nathalie Guilbaud, with a booklet gathering the testimonies of some of his former students.
Nadia Boulanger's final student, Émile Naoumoff composed his first piano concerto at the age of nine; he performed it the following year under the direction of Yehudi Menuhin. His rise as a concert performer was meteoric and thrust him onto the international scene. For the past twenty years, he has been teaching at the prestigious Indiana University Jacobs School of Music in Bloomington, whose alumni include some of the world's most successful musicians.
This interview of Émile Naoumoff by Nathalie Guilbaud was recorded at the Cité internationale des arts in Paris on January 24, 2020. The DVD is accompanied by a booklet with testimonials by some of Emile Naoumoff's former students, who evoke their experiences with this exceptional artist and teacher
Émile Naoumoff (born 1962 in Sofia, Bulgaria) is a French pianist and composer. A precocious prodigy, the last student of Nadia Boulanger, who allowed him to work with such personalities as Leonard Bernstein, Yehudi Menuhin, Soulima Stravinsky, Henri Dutilleux and Aram Katchatourian, his career has continued mainly in the United States. Émile Naoumoff is regularly invited by the world's premier orchestras: the Los Angeles Philharmonic Orchestra, the Berlin Symphony, the Vienna Symphony, the San Francisco Symphony, National Symphony in Washington, Moscow Symphony, NHK Symphony, the Residentie Orkest of the Hague, Orchestre Philharmonique de Radio-France, Camerata Bern, and has worked closely with conductors such as Igor Markevitch, Leonard Slatkin, Mstislav Rostropovich and Eliahu Inbal. He has also collaborated with musicians including Jean-Pierre Rampal, Gerard Souzay, Yo-Yo Ma, Gary Hoffman, Olivier Charlier, Patrice Fontanarosa, Regis Pasquier, Philippe Graffin, Philippe Bernold, Gerard Caussé, Jean Ferrandis, Dominique de Williencourt and the Fine Arts Quartet.
Émile Naoumoff has taught at the Conservatoire national supérieur de Musique et de Danse de Paris, at the Ecole d'arts américaine—Fontainebleau's castle, at the International Academy of Music—Rangiport's castle, which he created, at the Centre Jeunes Vocations Littéraires Artistiques et Scientifiques, at the summer training of Santander and at the European American Musical Alliance, at the Schola Cantorum, at the academy of the Verbier Festival, at the trainings in Banff (Canada) as well as at the University of Indiana, Bloomington, the Jacobs School of Music, in the United States.
order wishlist
Edited by Gilles Coudert.
published in July 2022
French edition (English subtitles)
DVD Digipack DVD5 – PAL – MULTIZONE – AC3 Stereo – 16/9
47', 40 page booklet
20.00 €
EAN : 3760083750526
in stock
view video sample
https://vimeo.com/723311136 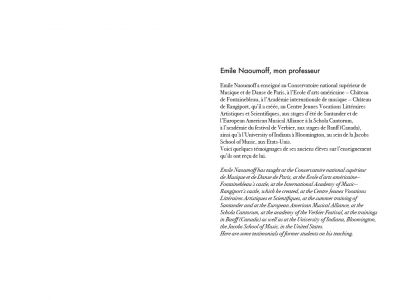 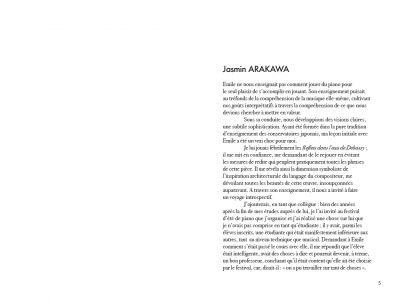 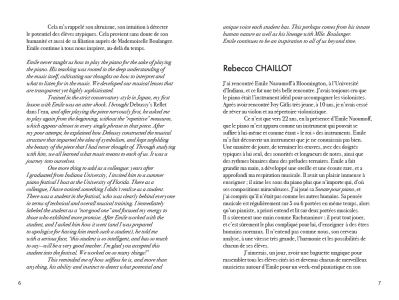 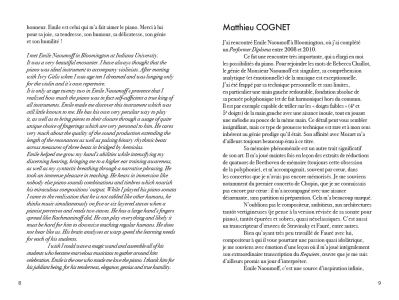