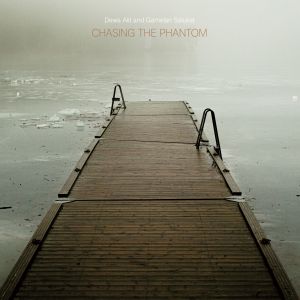 order
wishlist
Dewa Alit, Bali's master of contemporary Gamelan composition, returns to Black Truffle with Chasing the Phantom, presenting two recent works played by the composer's Gamelan Salukat, a large ensemble that performs on instruments specially built to his designs, using a unique tuning system that combines notes from two traditional Balinese Gamelan scales.
Alit explains that the ensemble's name suggests "a place to fuse creative ideas to generate new, innovative works" and both compositions demonstrate the composer's ability to wring stunning new possibilities from variations on the traditional Gamelan ensemble. While using familiar elements of Balinese Gamelan music, such as unison scalar melodies and stop-start dynamics, Alit's music is overflowing with harmonic, rhythmic, and timbral inventions, the latter often facilitated by unorthodox playing techniques.
"Ngejuk Memedi", an English translation of which gives the LP its title, results from Alit's reflection on the complex relationship between tradition and modernity in Balinese culture, particularly in the way that belief in the phantoms or spirits known as 'memedi' are shared through social media using digital technologies. Embodying this uncanny co-existence, the opening passages of the piece are at once immediately recognisable in their use of the metallophones of the Gamelan ensemble and strikingly reminiscent of electronics in their timbre and movement. At points, what we hear seems to have been fragmented with digital tools, or even to originate in some incessantly glitching DX7. Short melodic figures loop irregularly, with the ensemble splintering into polyrhythmic shards before unexpectedly recombining for intricate unison passages. After several minutes of this manically tinkling metallic sound world, the metallophones are joined by drums for a meditative passage of lower dynamics, as the uniformly high pitch range explored in the opening sections gradually opens up to include resonant low gong hits. Recovering some of the manic energy of the opening, but now enhanced with the full range of percussion, the piece weaves through a series of tempo changes to a stunning passage of rapid-fire melodies and ringing chords that sweep across the metallophones, their unorthodox tuning creating complex clouds of wavering harmonies.
"Likad", written during Covid-19 lockdowns, channels anxiety and uncertainty into musical form, resulting in a piece that, even by Alit's standards, is stunning in its complexity and the virtuosity it demands of Gamelan Salukat. Its opening section is perhaps most remarkable for its mastery of texture, with rapid transitions between dry, muted strikes and metallic shimmers calling to mind the use of filters in electronic music. At points, the complex irregular repetitions of short melodic patterns, where the music seems to get stuck or be suddenly interrupted by a skip, recall the mad sampler works of Alvin Curran or the skittering surface of prime period Oval more than anything familiar from acoustic percussion music. Moving through a dizzying series of twists and turns, the piece ends with a majestic sequence of chords possessing an almost hieratic power. A major statement from a radical contemporary composer, one cannot help but agree with Alit when he sees Chasing the Phantom as an answer to the "question of the future of Gamelan music".
Born to a family of artists in Pengosekan village in Bali, Dewa Alit grew up surrounded by Balinese gamelan music from early childhood. His father Dewa Nyoman Sura and his oldest brother Dewa Putu Berata were the most influential teachers for gamelan in his life. He began performing at age 11, and by age 13 was playing in his village's adult group, Tunas Mekar Pengosekan. 1988-1995 he played in the internationally acclaimed Gamelan Semara Ratih of Ubud village, touring internationally. In 1997, a year before graduating from Academy of Indonesian Performing Arts in Denpasar (STSI Denpasar), Dewa Alit and his brothers founded a gamelan group Çudamani which immediately acknowledged as one of the best gamelan groups and went on their own international tours. Dewa Alit founded his own gamelan group in 2007, Gamelan Salukat, seeking a wider path for expressing his approach to new music in gamelan and performing on a new set of instruments of Alit's own tuning and design.
As a composer, Dewa Alit is generally acknowledged as the leading figure of his generation in Bali and beyond. His "Geregel" (2000) was so widely influential that it became the subject of a 50-page analysis in the "Perspectives on New Music - Winter 2002" by Wayne Vitalle.  One of his compositions written for a Boston-base gamelan group Galak Tika, "Semara Wisaya" was performed at New York Carnegie in 2004 and another composition "Pelog Slendro" appeared at Bang on a Can Marathon in June 2006. His compositions for non-gamelan ensembles includes music for MIT's Gamelan Electrika, Talujon Percussion (USA) and Ensemble Modern (Frankfurt, Germany).
As a collaborator, Dewa Alit has worked with musicians and dancers from around the world. These include a contemporary theater production Theatre Annees Folles (director: Alicia Arata Kitamura, Tokyo),  a butoh dancer Ko Murobushi, contemporary dancers Min Tanaka and Kaiji Moriyama, and Noh master Reijiro Tsumura.
Dewa Alit was the gamelan director in Evan Ziporyn's opera "A House in Bali" with his Gamelan Salukat and toured with Bang On a Can All-stars to USA in 2009 and 2010.
He was regularly invited to teach and compose outside Bali, which includes University of British Colombia, Massachusetts Institute of Technology, and Helena College in Perth.
order wishlist
published in September 2022
27.00 €
EAN : 4250101438332
in stock