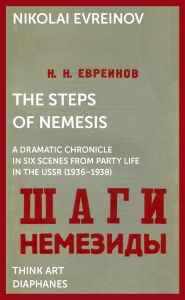 order
wishlist
The theatricalization of the Soviet Union through the reenactment as theater of the Stalinist show trials by the playwright Nikolai Evreinov.
In the 1910s the Russian theater director and theorist Nikolai Evreinov insisted on the theatricalization of life. Twenty years later Evreinov, who had left Russia in 1924, was in exile in Paris when Stalin staged three elaborate political show trials in Moscow. Now he meticulously read the transcripts of the trials in the Russian-language press, collected material on Nikolai Bukharin and the other defendants, consulted with experts, and finally wrote a play, his response to the staging of a judicial farce. With this response, he possibly also wanted to rehabilitate his idea of the theatricalization of life. After all, the theatricalization of life does not mean performing false confessions, constructing conspiracies, fabricating facts, or casting hired witnesses. In his theatrical theory, Evreinov was concerned not to make the theater of life invisible. His play is therefore not a historical reconstruction, but an imaginary look behind the scenes, in which the Stalinist perpetrators confess to the real crime in the end: the theater
Nikolai Evreinov (1879-1953), theater theorist, director, and playwright, gained renown with his theories on the "natural" theatricality of human beings, "theater as such," and "theater for itself." His plays—monodramas and pieces that staged his idea of theater therapy—were rather aesthetically conventional. Evreinov already became involved in replications and reenactments at the Starinnyi Theater (Antiquarian Theater), which he co-founded and where he reconstructed and reenacted historical performances. Even after emigrating to Paris in 1924, he monitored the theatricalization of the Soviet Union, especially with the reenactment as theater of the show trials The Steps of Nemesis (Shagi nemezidy). Evreinov was the head director for The Storming of the Winter Palace, "commandeered" for this purpose from the military.
order wishlist
Edited by Gleb J. Albert and Sylvia Sasse.
Afterword by Gleb J. Albert and Sylvia Sasse.
Translated by Zachary Murphy King.
published in June 2022
English edition
11,8 x 19 cm (softcover)
224 pages
25.00 €
ISBN : 978-3-0358-0516-1
EAN : 9783035805161
in stock

The Steps of Nemesis

The Steps of Nemesis