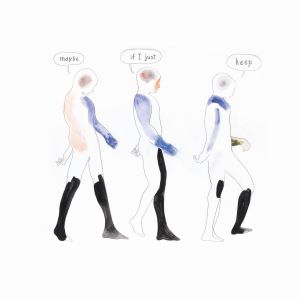 pre-order
wishlist
A poetic and "environmental" record, weaving delicate instrumentals with spoken word.
"Felicia Atkinson's music always puts the listener somewhere in particular. There are two categories of place that are important to Image Language: the house and the landscape. Inside and outside, different ways of orienting a body towards the world. They are in dialogue, insofar as in the places Atkinson made this record—Leman Lake, during a residency at La Becque in Switzerland, and at her home on the wild coast of Normandy—the landscape is what is waiting for you when you leave the house, and vice-versa. Each threatens—or is it offers, kindly, even promises?—to dissolve the other. Recognizing the normalization of home studios these days, she revisited twentieth-century women artists who variously chose, and were chosen by, their homes as a place to work: the desert retreats of Agnes Martin and Georgia O'Keefe, the life and death of Sylvia Plath. Building a record is like building a house: a structure in which one can encounter oneself, each room a song with its own function in the project of everyday life.
At times listening to Image Language is immediate, something like visiting a house by the sea, sharing the same ground, being invited to witness Atkinson's acts of seeing, hearing, and reading in a sonic double of the places they occurred. In an aching moment of clarity in 'The Lake is Speaking,' a pair of voices emerge out of the primordial murk of piano and organ, accompanying the listener to the edge of a reflective pool that makes a mirror of the cosmos. 'I open my feet to fresh dirt, and the wet grass. I hold your hand. You hold his hand. In the distance without any distance. The comets, the stars.' At other times, listening to Image Language is more like being in a theater, the composition a tangle of flickering forms and media that illuminate as best they can the darkness from which we experience it. On 'Pieces of Sylvia,' a noirish orchestra drones and clatters beneath and around a montage of vocal images, stretching the listener across time, space, subjectivities. Atkinson says that Image Language is like the fake title of a fake Godard film. There is indeed something cinematic about Atkinson's work—not cinematic in the sense that it sounds like the score for someone else's film, but cinematic in the sense that it produces its own images and language and narratives, a kind of deliberate, dimensional world-building in sound.
Image Language is built from instruments recorded as if field recordings, sound-images of instruments conjured from a keyboard, instruments Atkinson treats like characters, what she calls 'a fantasy of an orchestra that doesn't exist.' And then, speaking of Godard, there are the monologues, operating as both experimental-cinematic device and a literary style of narration. Voice can be a writerly anchor or a wisp of a textural presence. Atkinson's capacious and slippery speech plunges into and out of the compositional depths, shifting shapes, channeling the voices of any number of beings, subjectivities, or elements of her surroundings—not unlike her midi keyboard, able to speak as a vast array of instruments.
Image Language is an environmental record, in the vastest sense of the world. It is about getting lost in places imagined and real; it registers, too, the dizzying feeling of moving between such sites. It puts forth a concept of self that is hopelessly entangled with the rest of the world, born of both the ache of distance and the warmth of proximity."
— Thea Ballard, 02.2022
Félicia Atkinson (born 1981 in Paris, lives and works in Brussels) is graduated with Honors from l'Ecole Nationale Supérieure des Beaux-Arts de Paris and studied also anthropology and contemporary dance. She is a sound and visual artist, an experimental musician and the co-publisher of the independent imprint Shelter Press. Her paintings, drawings, sculptures and musical compositions are mostly abstract. Her work takes its sources from the American tradition of painting (Morris Louis, Cy Twombly, Richard Tuttle) and from avant-gardes figures who worked on chance and randomness (Fluxus, John Cage, La Monte Young...) as much as feminist figures in music and art.
pre-order wishlist
Mastering: Stephan Mathieu.
Artwork: Aidan Koch.
published in July 2022
13.00 €
currently out of stock 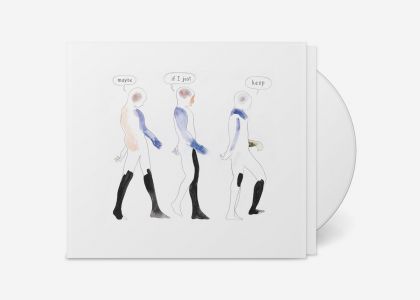