The Future is Inherited – Fragments of a Chile in Revolt 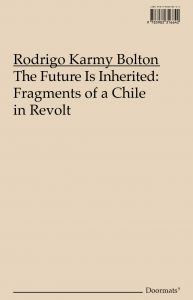 order
wishlist
A collection of articles and essays around the Chilean popular rebellion initiated in 2019.
Parallel to what emerged with force on October 18, 2019, these are fragments that carry with them the sign of danger and the potential for cohesion, both because of the flammable matter they deal with and because of the urgency they create. In Rodrigo Karmy Bolton's writing, the incandescence of the people, the Averroist analysis of a necessary Constituent Assembly, and the bankruptcy of the transitional episteme of the state, are brought forward with a feverish rigor. The revolt, like his writing, continues to remind us that in the most decisive tremor, in the adjustment with our historicity and, with the words of Salvador Allende, the future is inherited.
Rodrigo Karmy Bolton is professor and researcher at the Center for Arabic Studies in the Faculty of Philosophy and Humanities, University of Chile. In his work, contemporary thought is intertwined with medieval Greek-Arab thought, focusing on the question of imagination. This includes research on the theological roots of modernity, the comparative research of Christianity and Islam, and medieval Arabic philosophy. He holds a PhD in Philosophy from the University of Chile with a thesis entitled "Politics of In(Ex)-carnation: Elements of a Genealogy of Biopolitics." He is the author of Barbarian Writings: Essays on Imperial Reason and the Contemporary Arab World (LOM, Santiago de Chile, 2016) and Intifada: A topology of popular imagination (Metales Pesados, Santiago de Chile, 2020), among others.
order wishlist
Translated by Sebastián Jatz Rawicz.
published in February 2022
English edition
11,4 x 17,8 cm (softcover)
116 pages
10.00 €
ISBN : 978-3-9823166-4-2
EAN : 9783982316642
in stock

The Future is Inherited

The Future is Inherited