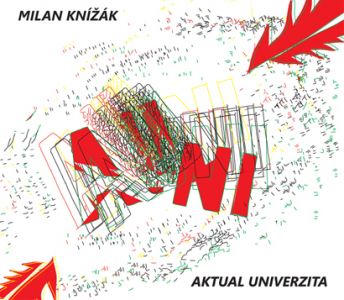 order
wishlist
Two pieces based on Milan Knízak's canonical text Aktual University, dating from 1967, containing ten short lectures outlining the university's character—On Conflict, On Dreams, On Revolutions, On Love, On Belief, On Art, etc. These lectures were to serve as inspirational schemes for lectures, seminars and discussions held at an ideal university.
In the first piece, Aktual University, Milan Knízak reads his own text, with Opening Performance Orchestra providing the musical accompaniment. It was performed live in October 2019 at the Movement-Sound-Space festival in Opava, where this recording was made. The second track, titled Broken Suite, is a studio remix, in which Opening Performance Orchestra used fragments and quotations from Milan Knizák's compositions, conceived over the past fifty years, applying the "broken" method. The majority of them are made public for the very first time in the newly created Broken Suite.
The booklet features English translations of ten Aktual University lectures, as well as Milan Knizak's contemporary initiation text.
Milan Knížák (born 1940 in Plzeň, Protectorate of Bohemia and Moravia, today Czech Republic) is a Czech performance artist, sculptor, musician, installation artist, dissident, graphic artist, art theorist and pedagogue of art.
Before everyone else—Christian Marclay, Philip Jeck, eRikm, Martin Tétreault, Otomo Yoshihide—there was Milan Knížák. In 1964, Knížák, a member of Fluxus from behind the Iron Curtain, sat down on a sidewalk near the Charles Bridge in Prague, laid down a paper carpet right into the street, and starts tearing pages out of books and burning them... Around the same time, he began to create music from defective, worn, damaged or broken LP's, which would ultimately result in 1979's Broken Music, his major musical work.
Leading figure of contemporary art in Eastern countries before the fall of USSR, Milan Knížák directed the National Gallery in Prague and teaches since 1990 at the Academy of Fine Arts, Prague.
Opening Performance Orchestra is a seven-member ensemble encompassing a wide genre span—from the 20th-century electronic thrusts of the musical avant-garde as far as contemporary Japanese noise music. Its own creations are based on fraction music, with the initial sound being digitally destroyed, fractured, and uncompromisingly rid of all its original attributes within the spirit of the credo “no melodies – no rhythms – no harmonies”. The results are original compositions (such as Spring Ceremony or Fraction Music, Evenfall, Creeping Waves) as well as reinterpretations of other composers' pieces that the ensemble feels to be in the same vein—cases in point being Inspirium Primum, referring to the material by Hiroshi Hasegawa, a Japanese noise music representative; Re:Broken Music, based on the destroyed music of the Czech Fluxus artist Milan Knížák; Chess Show, a distinctive John Cage reminiscence; Perceived Horizons, a tribute to musique concrète; The Noise of Art and Futurist Soirée, originating from the ideas and texts of the Italian Futurists and bringing to bear authentic instruments known as intonarumori.
During its existence, Opening Performance Orchestra has given a number of concerts, for example, at MaerzMusic, a contemporary music festival in Berlin (2014, Broken Re:broken); at the New Music Exposition international festival in Brno (2014, Broken Re:broken); at the Minimarathon of electronic music held as a part of the Days of Ostrava festival of contemporary music (2013, The Noise Of Art); at the Next festival of progressive music in Bratislava (2014, Fraction Music VII); at the Prague Industrial Festival (2006, Fraction Music, and 2008, Astropo); at the Wroclaw Industrial Festival (2007, Fraction Music II); at several previews of the Czech Concretists' Club, including a retrospective at Topièùv salon in Prague (2015, The Contours of Sounds); at the opening of the Membra Disjecta for John Cage exhibition at the DOX gallery in Prague (2012, Chess Show); at the National Gallery in Prague during the Art's Birthday party given by Czech Radio (2016, Futurist Soirée); and at Ostrava Days, in co-operation with Reinhold Friedl (2017, Chess Show).
Since 2010, Opening Performance Orchestra has regularly organised Noise Zone, an open audio-visual project mapping the noise scene, which has hosted, among others, Hiroshi Hasegawa, Astro, Merzbow, Schloss Tegal, Einleitungszeit, Birds Build Nests Underground, Instinct Primal, Magadan, Napalmed and others.
Since 2006, Opening Performance Orchestra has released CDs, mostly as self-publishers, but also with the Belgian label Sub Rosa (Broken Re:broken, together with Milan Knížák, October 2015) and the German label Psych KG (Fraction Elements, together with Hiroshi Hasegawa, August 2016). At the beginning of 2016, Opening Performance Orchestra recorded the composition Futurist Soirée, commissioned by Czech Radio, which was performed within the EBU international exchange network in November 2016.