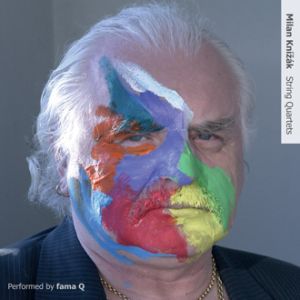 wishlist
A compilation of string compositions and collages by multimedia artist and composer Milan Knížák, performed by the fama Q string quartet.
Violin was Milan Knížák's first instrument. He has composed hundred of works of this ilk. The first one DHK, 45 years ago. Next to his destroyed works, Milan took notations of different composers, cut them and put them together (with his own score) into a collage, expressing his feelings and his apprehension of music.
These compositions are performed by fama Q which is a string quartet founded in 2005 in Prague. Its members, being also orchestral musicians with the Prague Philharmonia, were always devoted to chamber and string quartet music making. Fama Q presents regularly the works of contemporary composers, be it the traditional approaches of 20th century or the avant-garde classics as well as prominent international and Czech composers of these days.
“I am aware that the majority of my compositions are technically challenging, since I employ uncommon intervals, so as to make the musicians think in a different, novel way and to produce different colours in the "classical" passages too. If the instruments were arrayed "beneath one another", simple melodies may come across as boring. In the case of interval skips, whereby I count with a certain fuzziness, even falseness of tones, music is far more colourful. I don't care who would perform my pieces, as long as they are solid musicians. I think I have written them in such a manner that they should not forfeit energy even when someone is not familiar with the modern playing principles, only their effect would somewhat shift. And I really don't mind any shift. One of my friends said that this music of mine is not similar to anything. I would like to add that it is similar to everything. Perhaps both are true.”—Milan Knížák, April 2018
Milan Knížák (born 1940 in Plzeň, Protectorate of Bohemia and Moravia, today Czech Republic) is a Czech performance artist, sculptor, musician, installation artist, dissident, graphic artist, art theorist and pedagogue of art.
Before everyone else—Christian Marclay, Philip Jeck, eRikm, Martin Tétreault, Otomo Yoshihide—there was Milan Knížák. In 1964, Knížák, a member of Fluxus from behind the Iron Curtain, sat down on a sidewalk near the Charles Bridge in Prague, laid down a paper carpet right into the street, and starts tearing pages out of books and burning them... Around the same time, he began to create music from defective, worn, damaged or broken LP's, which would ultimately result in 1979's Broken Music, his major musical work.
Leading figure of contemporary art in Eastern countries before the fall of USSR, Milan Knížák directed the National Gallery in Prague and teaches since 1990 at the Academy of Fine Arts, Prague.
wishlist
published in November 2019
black vinyl LP + color insert
4 tracks (9'38 / 13'25 / 5'49 / 20'36)
sold out