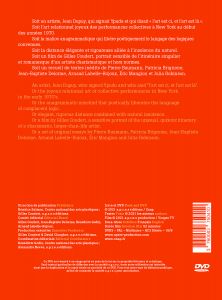 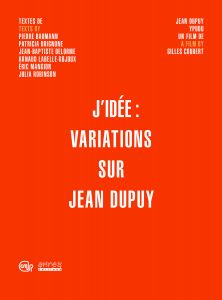 order
wishlist
A portrait of Jean Dupuy through a film by Gilles Coudert and a collection of unpublished texts.
An artist, Jean Dupuy, who signed Ypudu and who said "l'art est ci, et l'art est là". Or the joyous relational art of collective performances in New York in the early 1970's. Or the anagrammatic mischief that poetically liberates the language of complacent logic. Or elegant, rigorous distance combined with natural insolence. Or a film by Gilles Coudert, a sensitive portrait of the unusual, quixotic itinerary of a charismatic, larger­than­life artist. Or a set of original essays by Pierre Baumann, Patricia Brignone, Jean-Baptiste Delorme, Arnaud Labelle-Rojoux, Éric Mangion and Julia Robinson.
The film by Gilles Coudert tells the story of the unusual destiny of Jean Dupuy and delves into the sensitive, human, quixotic and extraordinary adventures of Dupuy's life and work. The film is a portrait of a person with multiple lives: trailblazer in technological art, performer and organiser­extraordinaire of artistic soirées in the effervescence of New York in the 1970­1980's, who became a 'graphologist', hermit, tinkerer and anagrammer who withdrew at the end of his life to Pierrefeu, a perched village at the top of a mountain in the hinterland of Nice. The film weaves in private conversations between Jean Dupuy and the film director, and personal testimony from Patricia Brignone, Catherine Cattaneo, Augustin Dupuy, Alexandre Gérard, Arnaud Labelle-Rojoux, Éric Mangion, Jeffrey Perkins, Julia Robinson and Christian Xatrec. Most of the archive images are seen here for the first time, and enable viewers to follow Dupuy's itinerary and place his actions in their historic and artistic context.
Jean Dupuy (1925-2021) lived and worked in Roquesteron (France) and New York City.
He is a pioneer of work combining art and technology. In 1968, he received the Experiment in Art and Technology award, organized by Billy Klüver and Robert Rauschenberg, for his play entitled Heart Beats Dust. Immediately after this recognition, the play was simultaneously shown at the Brooklyn Museum and, through a second version, at the now mythical Pontus Hulten's The Machine as Seen at the End of the Mechanical Age exhibition at the MoMa. He works in the fields of conceptual art, performance art, painting, installations, sculptures and video art. In the 1970s he curated many performance art events involving different artists from Fluxus, the New York's avant-garde and neo-dada scene. Many of his works are part of important collections such as Centre Pompidou in Paris, Mamac of Nice, Mac of Lyon, The Barnes Foundation, New York, The Emily Harvey Foundation, New York. 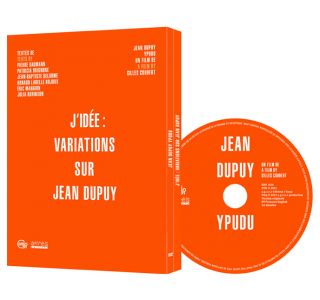 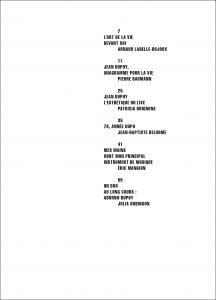