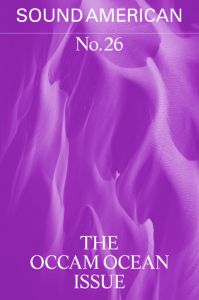 order
wishlist
An issue dedicated to Éliane Radigue's ground-breaking compositional work, OCCAM Ocean as seen through the eyes of her chevaliers de Occam, the performers who, in collaboration with Radigue, have brought the sprawling musical eco-system to life.
Sound American releases for its twenty-sixth issue the OCCAM Issue, which focuses on the radical musical eco-system of French composer Éliane Radigue's OCCAM Ocean project. In a first for the publication, this issue is built solely around interviews with the performers that have collaborated with Radigue to produce this body of work over the last decade. Contributors include Charles Curtis, Carol Robinson, Rhodri Davies, Catherine Lamb, Julia Eckhardt, Silvia Tarozzi, Dafne Vicente-Sandoval, Laetitia Sonami, and Frédéric Blondy. All interviews were conducted by SA's editor, Nate Wooley, also a performer of Radigue's music. The issue features an opening invocation from Radigue herself, followed by writing on the history and practice of the OCCAM pieces, interviews, and a concluding essay by Wooley on his own experience performing OCCAM X. This special issue concludes with the last of a three-part series of “exquisite corpse” compositions, written especially for SA by inti figgis-vezueta in response to the preceding work of Moor Mother and Amirtha Kidambi.
This issue also comes with a special one-of-a-kind pull-out poster detailing the entire OCCAM Ocean composition in all of its interconnected glory. Designed by Remake Designs, this is a unique graphic perspective on the human web of collaboration that Radigue has created.
A quarterly journal founded in 2012 by Nate Wooley, providing in-depth interviews and essays, Sound American starts from a simple desire to open the doors of experimental music to a wider audience. Sound American believes that music is for everyone and should be shared on the most basic human level. Sound American aims to accomplish this by creating a direct intellectual, social, and emotional bridge that links audiences and artists.
Advisory board: David Grubbs, Rebekah Heller, Taylor Ho Bynum, Zeena Parkins, Matana Roberts, and Ken Vandermark.
Sound American is also an editorial platform for other print or music projects.
Éliane Radigue (born 1932 in Paris) is considered one of the most innovative and influential contemporary composers, from her early electronic music through to her acoustic work of the last fifteen years. Influenced by musique concrète and shaped by regular sojourns in the United States, where she discovered analogue synthesisers, her work unfolds an intensity which is at once subtle and monumental. Through her deep reflections on sound and listening, not only her music but also her working methods have come to shape a widely resonating set of new parameters for working with sound as musical material.
order wishlist
published in April 2021
English edition
15 x 22,5 cm (softcover)
128 pages (ill.) + poster
15.00 €
ISBN : 978-1-733333-94-8
EAN : 9781733333948
in stock 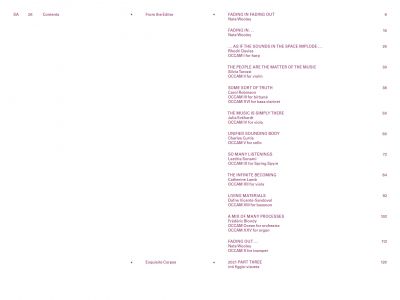 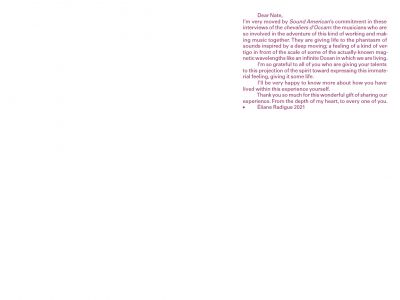 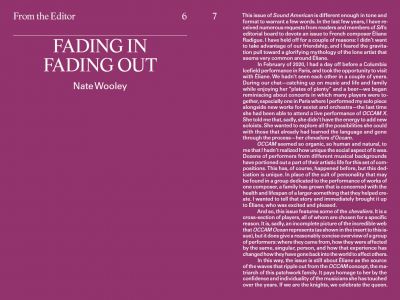 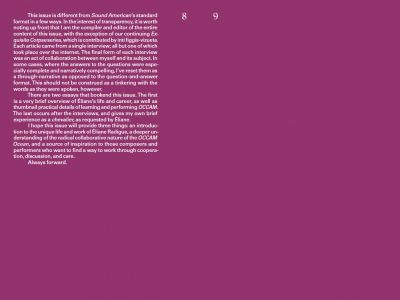 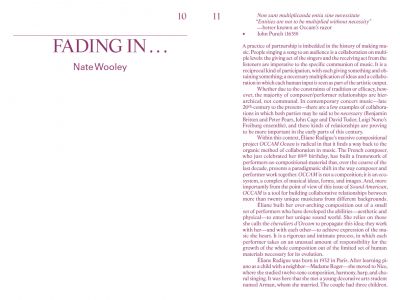 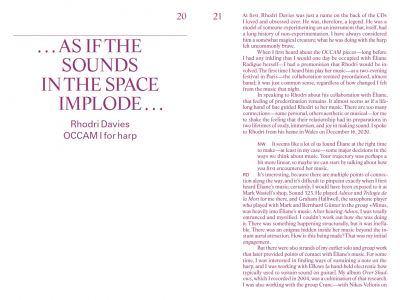 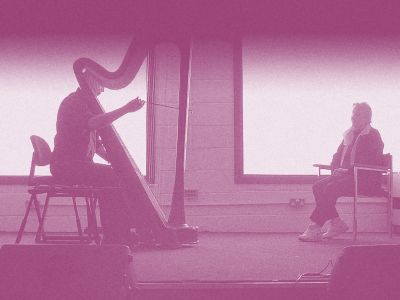 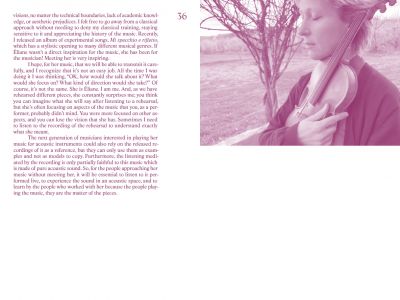 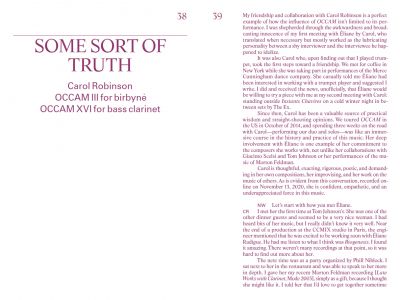 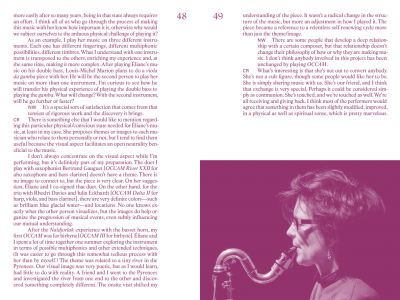 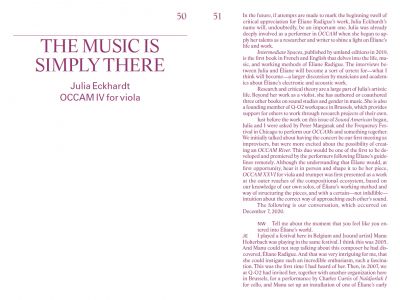 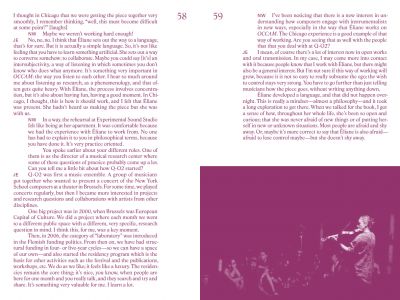 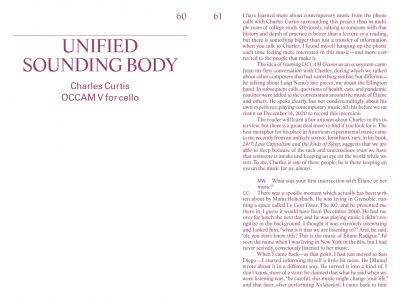 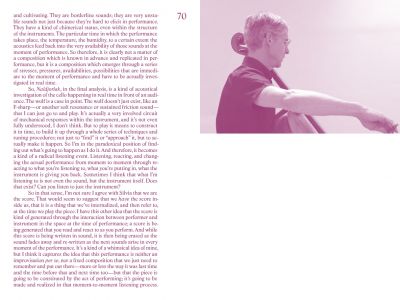 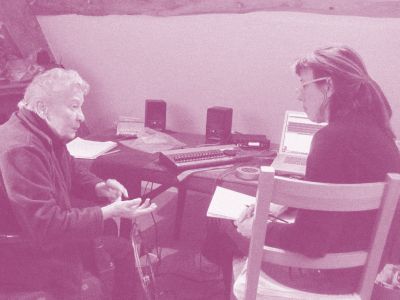 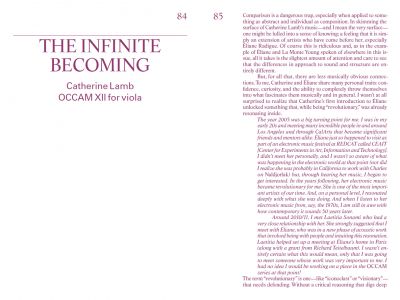 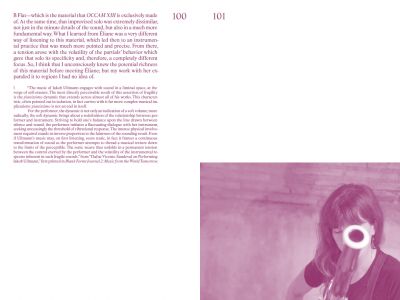 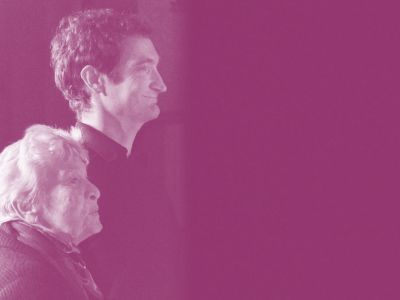 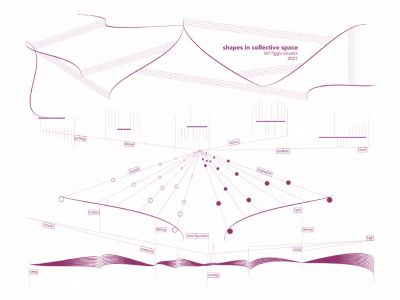