Nothing Is Finished (CD) 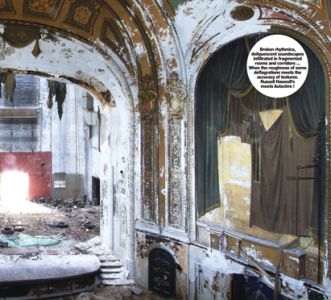 order
Silk Saw's 12th album, blending sweet and bitter in languorous and enigmatic melodies that float on intriguing pounding polyrhythms.
Since the early 90's, the Belgian duo Silk Saw has pioneered nearly unclassifiable electronic music at the forefront of experimental and avant-garde. Their 12th album is a contiguous expansion of the universe created in “Imaginary Landscapes”, the previous album published on Kotä in 2015. With the release of “Nothing is Finished” on Sub Rosa, Marc Mœdea and Gabriel Séverin are back home, since their very first trial, “Musique du garrot et de la ferraille”—under their strange “modern dada” alias, Jardin d'Usure—was released in 1994 (followed by the first two Silk Saw albums from 1996 and 1997). Now more than ever, without compromise, the duo makes full use of complex tools like Frequency Modulation, granular and morphing synthesis. In an array of delightful to jarring surprises, a sinuous ballad will be troubled with remote blasts, or abruptly interrupted by a collapse of the base. While the tracks resonate fundamentally with a feeling of falling, failing, decay, the sleeve picture conveys that destruction is in fact where everything starts.
See also Silk Saw – Nothing Is Finished (vinyl EP).
The sound of unclassifiable Brussels-based duo Silk Saw—Gabriel Severin (Babils, Rob(u)rang) and Marc Mœdea— is closest to what could vaguely be defined as rhythmic noise, but actually, it is difficult to label in spite of its hook to the synchronicity of pleasure and pain that creates human experience.
order
published in August 2020
14.00 €
EAN : 5411867114864
in stock
table of contents
Silk Saw: other title