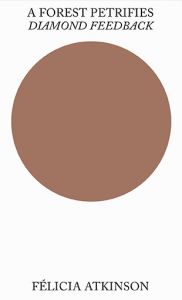 order
wishlist
The first part of a larger novel in several episodes: a text about the perception of time and how some places mark people's minds.
Inspired by the Petrified Forest in Arizona and its ability to change over time from an organic to a mineral state, the story was concieved by the musician and artist Félicia Atkisnon over the past five years, while its on-going writing has been the starting point of many of Atkinson's music lyrics and recent records and exhibitions.
A part of the book takes place in the middle of the desert in an indistinct future. Two men are having a discussion by a fire in a modernist house. The music they are listening to is not emitted by a device but by themselves, it's a new kind of technology. They look at the embers of the fire and it reminds them of a painting by Jeronemus Bosch. They suddenly wonder if those embers could be a republic of some kind.
A Forest Petrifies is a novel about the perception of time and how some places mark people's minds.
Experimental musician, sound and visual artist Félicia Atkinson (born 1981) lives on the wild coast of Normandy (France). She has played music since the early 2000s. She has released many records and a novel on Shelter Press, the label and publisher she co-runs with Bartolomé Sanson.
For Félicia Atkinson, human voices inhabit an ecology alongside and within many other things that don't speak, in the conventional sense: landscapes, images, books, memories, ideas. The French electro-acoustic composer and visual artist makes music that animates these other possible voices in conversation with her own, collaging field recording, MIDI instrumentation, and snippets of essayistic language in both French and English. Her own voice, always shifting to make space, might whisper from the corner or assume another character's tone. Atkinson uses composing as a way to process imaginative and creative life, frequently engaging with the work of visual artists, filmmakers, and novelists. Her layered compositions tell stories that alternately stretch and fold time and place, stories in which she is the narrator but not the protagonist.
Félicia Atkinson has collaborated with musicians including Jefre Cantu-Ledesma, Chris Watson, Christina Vantzou, and Stephen O'Malley, and with ensembles including Eklekto (Geneva) and Neon (Oslo). She has performed at venues and festivals including INA GRM/Maison de la Radio and the Philharmonie (Paris), Issue Project Room (NYC), the Barbican Center (London), Le Guess Who (Utrecht), Atonal (Berlin), Henie Onstad (Oslo), Unsound (Krakow), and Skanu Mesz (Riga). Her work has been commissioned by filmmakers (Ben Rivers, Chivas de Vinck) and fashion houses (Prada, Burberry). She has exhibited in museums, galleries, and biennials including RIBOCA Biennale (Riga), Overgaden (Copenhagen), BOZAR (Brussels), Espace Paul Ricard (Paris), and MUCA ROMA (Mexico City).
order wishlist
Graphic design: Bartolomé Sanson.
published in October 2019
English edition
11 x 18 cm (softcover)
56 pages
10.00 €
ISBN : 978-2-36582-035-6
EAN : 9782365820356
in stock 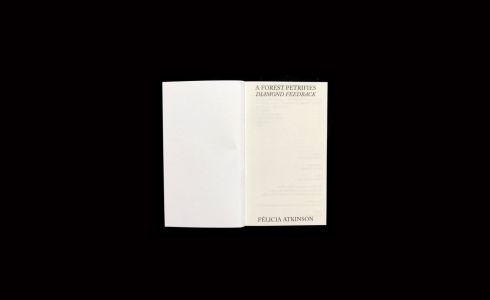 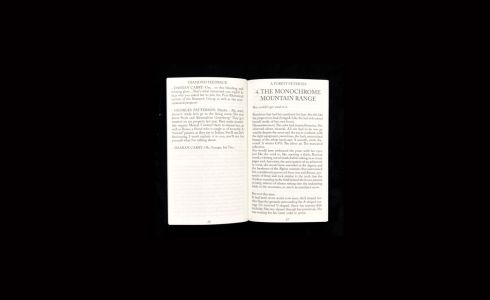