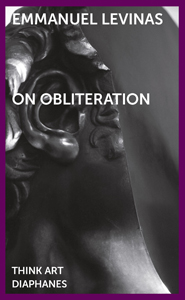 order
One of Levinas' rare statements focusing on the fine arts.
Emmanuel Levinas defines obliteration as a central concept with which to think about art. The interview with Françoise Armengaud is one of Levinas' rare statements focusing on the fine arts. Levinas has become influential in various disciplines through his ethics, which he thinks decisively from the face of the other. Yet his reflections on aesthetics are rarely engaged with, and when questions are asked about the face in art—and thus about the interrelationship of ethics and aesthetics—the main focus has been on his comments on literature. In this interview Levinas talks about the work of the French sculptor Sacha Sosno, and the complex relationship between ethics and aesthetics becomes no longer aligned with the face and language, but with iconic thinking and artistic operations and practices. Levinas understands obliteration as an “unavailable,” an uncanny, disruptive concept. In doing so, he turns away from the “ease and lighthearted casualness of the beautiful” and to the processes of material wear and tear and the traces of their repair. He affirms these for their creative potential in developing a uniqueness of presence.
The interview is supplemented by photographs by André Villers of Sosno's works, a foreword by Johannes Bennke and an epilogue by Dieter Mersch.
Emmanuel Levinas was a French philosopher of Lithuanian Jewish ancestry who is known for his work related to Jewish philosophy, existentialism, ethics, phenomenology and ontology. Central to the work is the claim that the Other is not known or comprehended as such, but calls into question and challenges the complacency of the self through Desire, language, and the concern for justice.
order
Original title: De l'oblitération, entretien avec Françoise Armengaud sur l'œuvre de Sosno, La Différence, 1990.
published in May 2019
English edition
11,8 x 19 cm (softcover)
80 pages (ill.)
18.00 €
ISBN : 978-3-0358-0144-6
EAN : 9783035801446
in stock