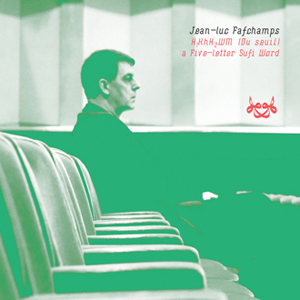 order
wishlist
Third chapter in the Sufi Word's series featuring Ensemble Musiques Nouvelles and Centre Henri Pousseur, conducted by Jean-Paul Dessy.
The Sufi Letters is a vast project of 28 compositions (for the 28 letters of the Arabic alphabet) undertaken in 2000 and still ongoing. I am drawing inspiration from the symbolic charts found in Sufi mysticism. Each Letter
is a sonic meditation on the frontiers of conscience and the paradoxes of time.Today's word, Du seuil [From the threshold], is the third word to be released by Sub Rosa. It is a journey of sort through grief: stages of conscience, journey through hell, nocturnal anxieties, meditation, resilience. Do not worry too much though, for isn't it from the distance of death that one can shine the best light on life? Isn't all grief alsoa threshold? (JLF)
Member of the Ensemble Ictus, Jean-Luc Fafchamps (born 1960 in Brussels) participated in numerous projects, both as a concert pianist (premieres of works by Lindberg, Reich, Aperghis, Mernier, Leroux, Harada, Francesconi , Levinas…) but also in multi-disciplinary performances, particularly accompanying dance (multiple performances with Rosas / Anne-Teresa de Keersmaeker) and theater.
order wishlist
published in February 2019
5 tracks (13'23 / 18'02 / 13'43 / 10'16 / 10'24)
15.00 11.00 €
(special offer)
in stock