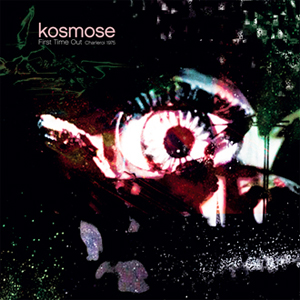 order
wishlist
The first (and the last) concert of mythic Kosmiche Belgian band Kosmose (1973-78): unreleased songs recorded and mixed in March 1975, something undoubtedly cosmic but with a DIY, home-made edge, dirtier than clean, noisier than technology-based.
“After some years rather cosmic and ragaesque music, we slowly began to explore some more experimental and noisy sonic expression. At the time, we only owned a few instruments and sound effects and, no drummer. We use to play long tracks in order to follow the trend of the alternative music of the period (please, remember, we are in 1975). The event was a total spectacle with an inventive light-show including a stroboscope and a frantic projection of strange abstract slides on a giant screen by Freddy Pourcel. Some incense was burnt time to time”.
Also available on vinyl.
Kosmose can be approached as a collective without a specific leader. The line-up fluctuated quite a lot around a rock-solid core formed by Alain Neffe and Francis Pourcel. Their sound evolved from something deeply influenced by Kosmische Musik to a purely improvised form of noisy free jazz. The whole adventure took place in the heart of the '70s, almost under wraps, though most rehearsals were taped by Neffe.
order wishlist
published in February 2019
2 tracks (42'33 / 60'16)
18.00 €
in stock