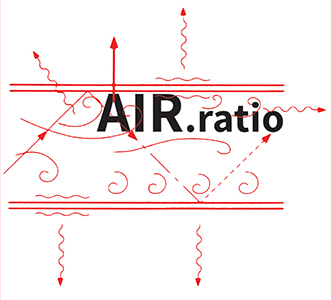 order
wishlist
Eric La Casa continues his series dedicated to Paris with the reedition of the classic AIR.ratio, a study of the sounds generated by ventilation systems in various Parisian buildings.Originally released in 2005 on the label SIRR.
“My listening project (about controlled mechanical ventilation in new buildings) is multiple: it can function as a sound study, a sonic data bank, a CD of environments, and finally as a music. This CD is intended to be an object without distinctive function. This is precisely what interests me: the question of listening, at home.”

“The result is a long, continous drone, which, on the surface, changes its timbre in fixed intervals and emanates an ambiance of wideness, spaciousness and concentrated intensity. On a deeper examination, the facets and rich details become visible and one can't help but marvel at the ever-different characteristics of the individual shafts: The aggressive corridor of the European Hospital Georges Pompidou, the darkly whistling winter winds of the Institute Pasteur or the galactically majestic dignity of the 'Radio France' toilet.”
Tobias Fischer, www.tokafi.com
Limited edition of 200 copies.
For more than 20 years, while listening to the environment, Éric La Casa (born 1968, Tours, lives and works in Paris) has been questioning the perception of reality and has expanded the notion of what's musical today. Through his aesthetic of capturing sound, his work fits equally into the fields of sound art and music. As a result of his in situ listening processes, he creates forms (of attention) that creep into the venues, slowly infuse there, and become other possible spaces. In the same way that the letter stimulates a country's reading, the in situ aesthetic object renews our relationship to space and landscape.
order wishlist
published in October 2017
CD digisleeve
33 tracks (63'00)
12.00 €
in stock