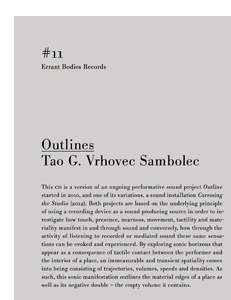 order
wishlist
This recording is the outcome of two sound projects—a performance and an installation—started in 2010 and 2012. Using a recording device as a sound producing source, the Slovene artist investigates the spatiality of sonic manifestation.
This CD is a version of an ongoing performative sound project Outline started in 2010, and one of its variations, a sound installation Caressing the Studio (2012). Both projects are based on the underlying principle of using a recording device as a sound producing source in order to investigate how touch, presence, nearness, movement, tactility and materiality manifest in and through sound and conversely, how through the activity of listening to recorded or mediated sound these same sensations can be evoked and experienced. By exploring sonic horizons that appear as a consequence of tactile contact between the performer and the interior of a place, an immeasurable and transient spatiality comes into being consisting of trajectories, volumes, speeds and densities. As such, this sonic manifestation outlines the material edges of a place as well as its negative double—the empty volume it contains.
Sound artist Tao G. Vrhovec Sambolec (born 1972 in Ljubljana) is working with the invisible ephemeral phenomena and the notion of space. His artistic practice is a poetic exploration of relationships between transitory and temporal flows like sound and weather phenomena and architectural and social spaces they inhabit. In his installations, he makes architecture sensitive to its immediate ephemeral surroundings and enhances the temporal dimension of architecture by creating situations where the outside and inside, the unpredictable and constructed, the permanent and temporal, time and space converse. His works encompass interdisciplinary and mixed media installations, sound interventions and electro acoustic music.
order wishlist
published in September 2017
13,5 x 18,2 cm (Digipack, inserted booklet)
6 titres
15.00 €
in stock