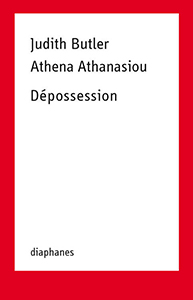 order
wishlist
Taking the form of a dialogue between the philosopher Judith Butler and the anthropologist Athena Athanasiou, this thought-provoking book seeks to elaborate our understanding of dispossession outside of the conventional logic of possession, a hallmark of capitalism, liberalism, and humanism.
Judith Butler is an American post-structuralist philosopher and philologist, renowned for her contributions to gender studies and feminism. She is a professor in the Rhetoric and Comparative Literature departments at Berkeley University, California, and also teaches at the European Graduate School, Saas-Fee. Her research interests include continental philosophy and critical theory, gender and sexuality, literary and cultural studies, race and ethnicity, as well as political and social thought.
Athena Athanasiou teaches at the Department of Anthropology at Panteion University, Athens, Greece.
order wishlist
Translated from the English (American) by Charlotte Nordmann (original title: Dispossession: The Performative in the Political, Polity, 2013).
published in September 2016
French edition
13,5 x 21 cm (softcover)
176 pages
18.00 €
ISBN : 978-2-88928-019-3
EAN : 9782889280193
in stock