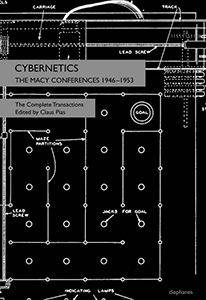 order
wishlist
Between 1946 and 1953, the Macy Conferences brought together a diverse and interdisciplinary community of researchers who together developed the basics of the new science of cybernetics. This publication contains the complete transcription and protocols of all contributions of one of the most important event in the contemporary history of science.
Between 1946 and 1953 ten conferences under the heading “Cybernetics. Circular, Causal, and Feedback Mechanisms in Biological and Social Systems” were held. Sponsored by Josiah Macy Jr., the so-called Macy Conferences mark perhaps the most important event in the history of science after WW II. Using new terms such as “information”, “feedback”, and “analogical/digital” as starting point, the participants tried to develop a universal theory of regulation and control, that would be applicable to living beings as well as to machines, to economic as well as to mental processes, and to sociological as well as to aesthetical phenomena. These concepts permeate thinking in such diverse fields as biology, neurology, sociology, language studies, computer science, and even psychoanalysis, ecology, politics, and economy. They marked the epoch-making changes from thermodynamics to cybernetics (Wiener), from the disciplinary to control society (Deleuze), and from the industrial to information society (Lyotard).
The Macy Conferences are of special historical/scientific value since they do not deal with completed texts yet, but rather with interdisciplinary negotiations about an emerging epistemology. This edition contains the complete transcription and protocols of all Macy Conference contributions.

“The result of this breathtaking enterprise was nothing less than a new way of looking at human beings.”
— N. Katherine Hayles: How We Became Posthuman