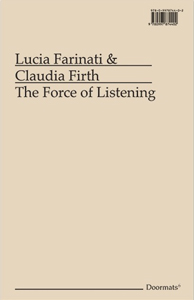 order
wishlist
The Force of Listening explores the role of listening in the contemporary intersection of art and activism and asks what potential for transformation it might facilitate.
“We sat and went through this very simple process of listening, and people were writing down on pieces of paper what they were hearing. They knew each other very well, they have worked together for a long time and they started to arrive at the point of their own contradictions. This hap¬pens, when you start to listen with a historical conscious¬ness, with this other object form of listening, which is just to describe the sound you hear.”
Robert Sember

“How do we create the space that can make listening possible?
If you have a situation where everybody listens to/hears each other but you feel that what you are saying is not respected… and if this mutual understanding of listen¬ing and speaking (this safe space) is not created, then lis¬tening is not possible.”
Alex - PWB

Written as a constructed montage in dialogic form, The Force of Listening draws from conversations with artists, activists, and political thinkers which took place during 2013-2014, in the aftermath of the wave of protests and occupations against austerity. Members of Ultra-red, Precarious Workers Brigade and feminist consciousness-raising groups, artists Ayreen Anastas and Rene Gabri, media theorist Nick Couldry and philosopher Adriana Cavarero meet on the page to discuss questions of listening. Conversations cover themes such as collectivity, solidarity and resonance, the politics of voice, the challenges of institutional frameworks and reflections on the Occupy movement. In particular, The Force of Listening traces a legacy from feminist theory and consciousness-raising practices through the narration of first-hand experience (from Pat Caplan and Anna Sherbany) and discussions on ethics and politics of listening. In so doing, it inserts a vital component that often gets missed in debates on the sonic and explores how attention and interconnection might exist in the face of current structures of neoliberal governance and the instrumentalized modes of being it fosters.

The Force of Listening is the sixth issue of the book series Doormats published by Errant Bodies Press. The series aims at contributing to the now, addressing issues that are present and that demand presence.
Lucia Farinati is a researcher, curator and activist. In 2007 she established Sound Threshold, an interdisciplinary curatorial project that explores the relationships between site, sound and text. She has worked with the Precarious Workers Brigade and the Micropolitics Research Group and has collaborated with many sonic art projects and radio initiatives including Helicotrema, bip bop, Errant Bodies, Audio Arts, Resonance 104.4 FM, Institution of Rot, e-Xplo, Radio Papesse and Radio Arte Mobile. Her research focuses on dialogic aesthetics, especially on the work of artist William Furlong and the feminist writing of Carla Lonzi which she has activated through collective readings and radio broadcasts. She is currently working on an extensive research project on Audio Arts in collaboration with Tate Archive as part of her PhD at Kingston University - FADA, London.
Claudia Firth is currently a PhD researcher at Birkbeck College, University of London in Cultural and Critical Studies. Her PhD is a non-linear history of three moments of post-economic crises (30s, 70s and the present) inspired by the historical novel The Aesthetics of Resistance. She has a background as a visual artist and facilitates workshops in both arts and activist arenas. She has worked with activist groups such as the Precarious Workers Brigade and the Radical Housing Network. Her current research interests are organization and collective knowledge production, tools and machines, and the intersection between aesthetics, affect and politics. She has written on a variety of subjects including the sharing economy, art and protest, disability and technology, and governmentality. Her writings include articles for Nyx, the journal for the Centre for Cultural Studies at Goldsmiths, University of London, Dandelion, the journal at Birkbeck College and DIS online magazine.
order wishlist
published in April 2017
English edition
11,4 x 17,8 cm (softcover)
200 pages
11.00 €
ISBN : 978-0-9978744-0-2
EAN : 9780997874402
in stock