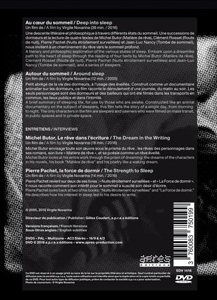 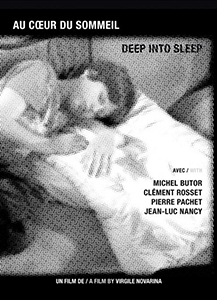 order
wishlist
A literary and philosophic exploration of the various states of sleep. Embark upon a dreamlike path to the heart of sleep through the reading of four texts by Michel Butor (Matière de rêve), Clément Rosset (Route de nuit), Pierre Pachet (Nuits étroitement surveillées) and Jean-Luc Nancy (Tombe de sommeil), and a series of sleepers.
The DVD also includes one film by Virgile Novarina and two video interviews with Michel Butor et Pierre Pachet:
Autour du sommeil (2005): A brief summary of sleeping life, for use by those who are awake. Constructed like an animal documentary on the subject of sleepers, this film tells the story of a single day, from morning to night. The only characters in the film are sleepers and yawners who were filmed on mass transit, in public spaces and in private space.
Michel Butor, le rêve dans l'écriture (2016): Michel Butor looks at his entire work through the prism of dreaming: the dreams of the characters in his novels, his book Matière de rêve and his poetry like a waking dream.
Pierre Pachet, la force de dormir (2016): Pierre Pachet looks back at two of his books: Nuits étroitement surveillées and La Force de dormir. He describes how his interest in sleep led to his desire to write.
Following his studies in Mathematics and Physics, Virgile Novarina (born 1976) devoted his work to the artistic exploration of his own sleep in the form of writing and drawings, and to the sleep of others in the form of photos and videos. Novarina has published eight books of Night Writings and Drawings and has exhibited his work in France, Germany, Portugal, Spain, Poland and the United States. Since 2006, the simple act of sleeping has become an integral part of his work, in performances entitled “En somme”, during which he sleeps in public in the display windows of stores, galleries and museums.
order wishlist
Edited by Gilles Coudert.
Films by Virgile Novarina.
published in December 2016
film in French version with English subtitles
DVD Digipack (DVD5 – PAL – MULTIZONE – AC3 Stereo – 16/9 & 4/3)
83' (4 films)
20.00 €
ISBN : 979-1-0914903-51
EAN : 9791091490351
in stock
press releases
Critique d'art, Virginia de la Cruz Lichet, 2017 (PDF)