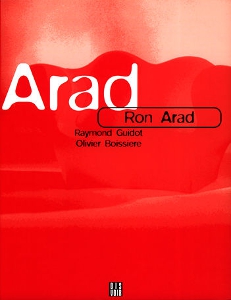 order
Ron Arad has held a position of reference in the world of design since the 1980's. Coming from a sculptural tradition, his work, questioning both aesthetics and modes of production, has transformed the perceptions of professional designers (comprehensive monograph).
Also available in English edition.

Olivier Boissière is a journalist and writer, specialized in contemporary architecture.

Raymond Guidot is a design historian.
Israeli Designer Ron Arad (born 1951 in Tel-Aviv) produced his first creations with metal tubes. These pieces were called One-offs because they were unique, Ron Arad attaching great importance to the uniqueness or limitation of his works. Also the name of his first company, the One-offs are typical of the artist's early career. In the beginning of the 1980's, Arad had his first success with Roverchair, a car seat resting on four-wheel. The bookworms and Mortal Coils sets will also bring him consecration, and celebrate the admiration he felt for Marcel Duchamp. Having initially preferred to use the polished steel to a high gloss furniture for his seat and table, Ron Arad will ultimately include wood, aluminum and plastic. The other pieces that have contributed to his fame are The Big Easy (1988-1989), Little heavy seat (1991), and in 2000, the Victoria & Albert chair.
order
Texts by Raymond Guidot.
Interview with Ron Arad by Olivier Boissière.
published in December 1997
French edition
16,5 x 21,5 cm (softcover)
128 pages (60 color & b/w ill.)
22.00 €
ISBN : 978-2-906571-58-7
EAN : 9782906571587
in stock
Ron Arad: other titles