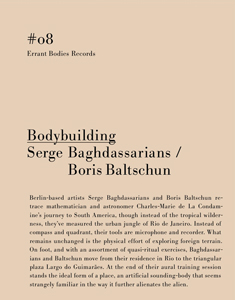 order
wishlist
An initiatory sound journey in the urban jungle of Rio de Janeiro.
Berlin-based artists Serge Baghdassarians and Boris Baltschun retrace mathematician and astronomer Charles-Marie de La Condamine's journey to South America, though instead of the tropical wilderness, they've measured the urban jungle of Rio de Janeiro. Instead of compass and quadrant, their tools are microphone and recorder. What remains unchanged is the physical effort of exploring foreign terrain. On foot, and with an assortment of quasi-ritual exercises, the artists move from their residence in Rio to the triangular plaza Largo do Guimarães. At the end of their aural training session stands the ideal form of a place, an artificial sounding-body that seems strangely familiar in the way it further alienates the alien.
Serge Baghdassarians and Boris Baltschun have been collaborating since 1999 in the fields of sound installation and electronic music. Their work often focuses on the conception and realization of temporary as well as longtime installations that use mechanical means to realize an aesthetic inspired by electronic music. With references to outdated 19th century technology (lovers telegraph, steam engine f.e.) as well as computer controlled motor systems, a visualization of sonic phenomena is pursued. Of importance are also seemingly simple and minimal setups (well known, but appropriated materials), which produce complex results.
order wishlist
Text, composition and direction by Serge Baghdassarians and Boris Baltschun.
Speakers: Dulcie Smart (center), Serge Baghdassarians (left), Boris Baltschun (right).
published in June 2013
13,5 x 18 cm (inserted poster + 16 pages booklet)
59'29''
14.00 €
in stock