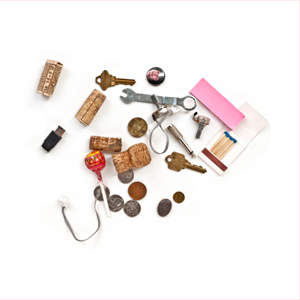 order
wishlist
A chamber music project on LP by the Italian composer, sound artist and performer, inspired by an African divination ritual.
Renard is a chamber music project by composer Aleassandro Bosetti, commissioned on the occasion of this LP release by the regional fond for Contemporary art FRAC Franche-comté.
The inspiration for the collection of pieces comprised in Renard came from a video that Alessandro Bosetti saw at the ethnological museum quai Branly in Paris. The video was showing an african woman divining the future by mean of throwing handfuls of objects on a table and reading their configuration in a relentless sequence of questions and answers to herself. Fascinated by the ritualized simplicity of this practice Bosetti and designer Annette Stahmer, selected a new pool of objects, devised an interpretation code and recorded several divination sessions with a few invited participants. Participants had been instructed on how to "read" the objects and they were able to elaborate answers to each other questions on matters as love, health, family, money, travels and whatever else they may have wished to receive advice on.
Distilled fragments of those intimate and emotional exchanges were portrayed in this series of pieces for voice, guitar and clarinet. The ephemeral and conversational nature of the original recordings eventually transformed into its opposite and got frozen into stylized music compositions.
All material was derived from the spoken interactions —as it is common practice in Bosetti's work—although this time speech is often not heard as such but rather used as root material for the creation of geometric melodic patterns that eventually proliferate into thematic constructions.
While Alessandro Bosetti is used to incorporate fragments du reel in his compositions—in the tradition of composer and radio makers like Luc Ferrari and Yann Paranthoen—the particularity of his method this time resides in his avoidance of sampling and recorded reproduction while creating life size casts of the portrayed scenes for voice and instruments in a sort of hand made hyperrealism.
The chosen form is a chamber trio with classical guitar, clarinet and voice with the occasional insertion of sinusoidal waves. It that may loosely remind of Anton Webern's three songs op. 18 (with piccolo clarinet and soprano swopping roles with bass clarinet and tenor voice ) or of Jimmy Giuffre trio explorations in the 60's.
The instrumentalists—both adopted Berliners by now - are New Yorker Seth Josel - one of the most in demand new music interpreters on the guitar that has been closely collaborating with composers as Tristan Murail, Helmut Lachenmann, Richard Barret and Phill Niblock and Laurent Bruttin from Lausanne mostly know for his work with the Ensemble Contrechamps in Geneva.
The music—thoroughly notated—is naked, cristalline, highly formal and stripped down to the bone with instruments and voice completely exposed in both fragility and virtuosistic precision. The focus is shifted away from noise and extended techniques and pointed towards the unfolding of melodic and prosodic possibilities as if a speech-melody section would have been added to Nichlas Slonimsky's thesaurus of scales and melodic patterns.
The name of the project, Renard, reminds of another african divination technique, that of the Dogon people, where the white fox, Renard pale in French, is interrogated overnight by tracing coded drawings on the sand and reading it's tracks in the following morning.
Alessandro Bosetti (born 1973 in Milan, lives and works in Marseille) is a composer and sound artist who focuses is in the fringe area between spoken language and music, working on the musicality of spoken words and unusual aspects of spoken communication, producing text-sound compositions featured in live performances, radio broadcastings and published recordings. In his work he moves across the line between sound anthropology and composition, often including translation and misunderstanding in the creative process. Field research and interviews build the basis for abstract compositions, along with electro-acoustic and acoustic collages, relational strategies, trained and untrained instrumental practices, vocal explorations and digital manipulations.
Bosetti created a series of highly compelling sound works where relational aesthetics meets innovative composition and published more than a dozen of cd's of his own music along with countless other collaborations.  Since 2000 he has been a key Ars Acustica figure, and created a vast body of electro acoustic and text sound works for institutions as WDR Studio Akustische Kunst, DeutschlandRadio and GRM among many other . Pieces like Il Fiore della Bocca (Rossbin/DLR 2005)—a work on the vocality of the mentally and physically impaired— and African Feedback—a collaborative scrutiny on experimental music in West Africa—(Errant Bodies Press, 2004) have received wide recognition and are considered classic contributions to the genre. Alessandro Bosetti is an emotional performer that has consistently toured in Europe, Asia and the United States as a soloist, leading his speech ensemble Trophies with Tony Buck and Kenta Nagai and in collaborations with fellow vocal performers as Jennifer Walshe and Tomomi Adachi and with pianist Chris Abrahams.
order wishlist
Composed by Alessandro Bosetti.
With Alessandro Bosetti (voice, oscillator), Laurent Bruttin (clarinet, bass clarinet), Seth Josel (classical guitar).
Recorded at Börne45 by Roy Carroll, June 2012.
Mixed by Alessandro Bosetti.
Mastered by Giuseppe Ielasi.
Graphic design: Fliegende Teilchen.
Cut at Handle with Care, Berlin.
published in March 2013
12.00 €
in stock
table of contents
press releases
Revue & Corrigée, Pierre Durr, 2013 (JPG)