Undertraining – On A Contemporary Dance 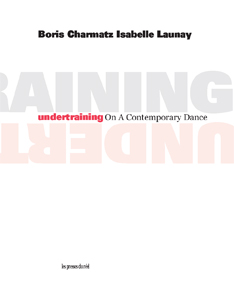 order
wishlist
English edition of the interviews with French dancer and choreographer Boris Charmatz.
Boris Carmatz and Isabelle Launay have a singular definition for this publication that is born from interviews they made with each other : “the goal is to talk about almost everything but not about nothing. Everything that constitutes contemporary dance today through our two points of view; a book that questions what is happening in the context that is ours, pushed by a certain urgency to reflect collectively. A sort of document or documentary... They are remarks "under" contemporary dance, rather than discourse that weighs on it...” From the flood of their conversations come extracts and recomposed texts. The itinerary of a dancer and choreographer who meet others and raise questions...
Dancer and choreographer Boris Charmatz has created a series of landmark works, from À bras-le-corps (1994) co-signed with Dimitri Chamblas, to danse de nuit (2016). In 2011, as associate artist of the Avignon Festival, he premiered enfant at the Cour d'honneur of the Popes Palace. In parallel, he has pursued work in both performance and improvisation and developed, in collaboration with Angèle Le Grand, diverse projects through Association Edna (from 1992 to 2008). The aim was to create a space open to a varie ty of artistic experiments: thematic sessions, films, one-off events (Hors-série), installations, exhibitions, and transdisciplinary projects. From 2002 to 2004, as part of his artistic residency at the Centre National de la Danse, Boris Charmatz developed Bocal, a project for a temporary and nomadic school. In 2007 and 2008, he was a guest professor at Berlin Universität der Kunste (HZT) where he contributed to the creation of a new dance curriculum. From 2009 to 2018, Boris Charmatz was appointed director of the Centre chorégraphique national of Rennes and Brittany, which he immediately proposed to transform into a Musée de la danse of a new kind, setting out his vision in a manifesto. Among other projects, the museum has initiated: expo zéro, Rebutoh, brouillon, Jérôme Bel en 3 sec, 30 sec, 3 min, 30 min, 3 h, Petit Musée de la danse, 20 dancers for the XX century, Fous de danse, and has travelled notably to Tate Modern (London), MoMA (New York), Foreign Affairs–Berliner Festspiele (Berlin), Opéra de Paris...
He's appointed director of the Tanztheater Wuppertal in 2022.
Isabelle Launay is Professor and researcher in the Department of Dance – University of Paris 8. She also teaches at the CNDC in Angers and collaborates with various artists working in the field of contemporary dance.
order wishlist
Translated from the French by Anna Preger (original title: Entretenir – A propos d'une danse contemporain, Les presses du réel, 2003).
published in June 2011
English edition
12,5 x 16 cm (softcover)
272 pages
15.00 €
ISBN : 978-2-84066-439-0
EAN : 9782840664390
in stock