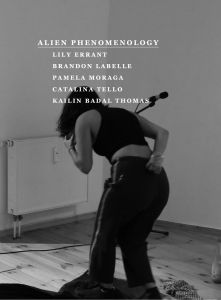 order
wishlist
Listening as the basis for social, bodily and passionate movement and transformation.
Are we not moved by the things we hear? These energetic intrusions and ambiences that touch the skin, vibrate the air, evoke relations. Is there an alien force intrinsic to sonic experience and the currents of sound? Currents that pass across subjects and objects, and that give way to a multiplicity of rhythms, vocalities, gestures, scrapings. The work circles around listening as the basis for movement and transformation, and that incites a mutational process in bodily, cellular, social and passionate ways. The effects of listening – of what we listen to, or what demands to be heard, what touches and resounds – come to shape something of the body, orienting habits, defining rhythms, interrupting views, vibrating the heart, putting us somewhere between ourselves and others. Such perspectives find echo in Catherine Clément's meditation on "syncope", which she utilizes as a theoretical framework in approaching questions of subjectivity. Drawing from the musical concept, Clément poses syncope as a process of delay, a type of fainting or form of loss, as well as recovery and renewal: to fall or lag behind, then to recover the tempo. Never back to oneself entirely, but rather, placed somewhere else, syncope is suggestive for appreciating "life's nocturnal dimension". A trembling, a sensitivity, a sympathy, or what Clément describes as an eclipse of individuality.
Following these perspectives, the work is developed through a set of physical actions with objects, materials, surfaces, elements, attuning to those things that support, touch, pressure, sustain and influence the body: alien things, nonhuman things, elemental things. Performed and improvised by a group of participating artists, the work listens by way of the hand, the knee, the tongue, listening across and through things so as to collaborate with all these forms and forces that surround, and that make of the body a partner, an enemy, a substance, a host.
Produced for Kunstradio, Vienna, as part of the series Social Music II. Originally broadcast on July 4, 2022.
order wishlist
With Catalina Tello, Kailin Badal Thomas, Lily Errant, Brandon LaBelle, Pamela Moraga.
published in October 2022
15.00 €
in stock