The world depicted by Armen Eloyan (born in 1966 in Armenia, lives and works in Zurich) in his strikingly gestural and expressive paintings can be anything from brutal to messy and dark, yet paradoxically they are almost invariably also loaded with an undercurrent of humor.
Armen Eloyan's paintings engage him entirely emotionally, mentally, and physically. Each of Eloyan's works is a celebration, or more precisely a ritual, that he insists on executing in the privacy of his studio, depicting images that usually stem from his collective and personal experiences in life. These can be anything from the fairy tales and comic strips he has heard and seen during his childhood, to Hollywood films and images of celebrities that marked his youth. In this way Eloyan not only faces the challenge to fuse his innate need to paint with a world of story telling, he also adds to them his own verve and vigor that consistently verge on parody, absurdity, and vanity. 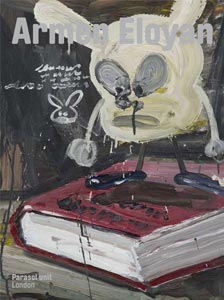