Olivier Peyricot (born 1969, lives and works in Paris and Saint-Etienne) is a designer, co-founder of iDSland design agency (1996-2010), consultant in design and urban planning (2008-2014), and teacher at ENSAD (2008-2014). He is Director of Research, Experiments and Publishing at the Cité du Design since 2014 and was Scientific Director of the 2017 Saint-Etienne's Biennial of Design. He also conducts personal research in design and space. His works are part of the collections of MoMA, FNAC, VIA and Centre Pompidou. 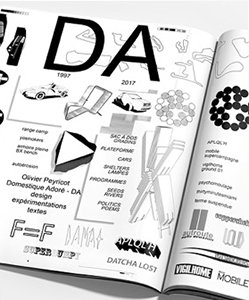 Domestique adoré, DA – Design, expérimentations, textes, 1997-2017
2017
French edition
it: editions
A collection of texts by artist and designer Olivier Peyricot, documenting his research and experiments since 1997. For twenty years, Peyricot has been questioning the political and social dimensions of design.The publication also features a rich iconographic documentation.