Lodovico Pignatti Morano is a Milan-based writer. He is the author of the novel Nicola, Milan (Semiotext(e), Los Angeles, 2014) as well as author and editor of Cinelli: the Art and Design of the Bicycle (Rizzoli New York, New York, 2012) and editor of Ideas from Massimo Osti (Damiani Editore, Bologna, 2012). 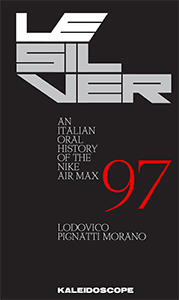 Le Silver – An Italian Oral History of the Nike Air Max 97
2017
English edition
Art centers, museums, galleries & varia
sold out
Originally a report commissioned by Nike, the book tells the story of the Air Max 97 phenomenon in Italy in the late 90s and early 00s, through the voices of those who wore the shoe with the greatest obsessiveness. In doing so, it becomes a snapshot of the attitude of late '90s Italian urban culture.