Benjamin H. Bratton (born 1968, Los Angeles, lives and works in La Jolla, San Diego, CA) is a theorist whose work spans philosophy, art and design. He is Associate Professor of Visual Arts and Director of The Center for Design and Geopolitics at the University of California, San Diego. He is also Professor of Digital Design at The European Graduate School in Saas-Fee, Switzerland. His research is situated at the intersections of political & social theory, emerging computational media & infrastructure, and interdisciplinary design methodologies. 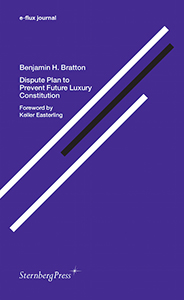