Josef Bauer's (born 1934 in Wels, Austria) practice finds itself somewhere between concrete poetry, performance and painting, in which the physical relationship towards linguistic production and display is explored. Unlike the concrete poets of his generation, Bauer examines the tangible landscape and spaces in which language and its representation towards the body are unified. These often-sculptural interventions and installations resemble a rebus-like structure, in which “scale” and “trace” play important roles. His interest in the relationship of the human body and its interaction to align with a sculptural object has been scrutinized by several of his peers such as Franz West, but Bauer introduced semiotics to underline the linguistic potential of these objects. His direct setting became his key to understand and relate to the world around him. This physical understanding he titled “Tactile Poetry”, which quite literally means “poetry-to-touch” or “touched poetry”. In the mid-60's, he abandoned “the paper” to visually express his interest in language through three-dimensional, set-like installations that incorporate painterly and performative landscapes. These sceneries and actions often include letters as sculptures to underline the scale in which subjects transform into objects. His “Buchstaben”, for example, consists out of metal poles, each holding a letter, and resembles blown-up page holders while also reminding us of props often used at demonstrations. The images that depict the struggle of the artists holding up the structures to form words, is a perfect example of his attempt to physically communicate with his surroundings. Bauer's work is more concrete than any other concrete poet, while simultaneously embracing the possible autonomy of its shapes thereby introducing a certain suggestive cryptography.
The perception and apprehension of color became an increasing fascination to emphasize the exploration between language and context. Almost dyslexic, the words and colors don't form a unity but provoke the perception of the object itself – color as language or vice versa. The “carriers” of these words and colors are just as important as they incorporate the essence of concrete reality. The unique and pioneering position the work of Josef Bauer holds, is one with earnest sensibility in a world of mass consumption and fast communication. 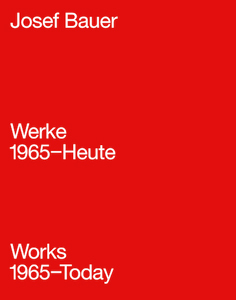