David Grubbs (born 1967) is an associate professor in the Conservatory of Music at Brooklyn College, CUNY, where he also teaches in the MFA programs in Performance and Interactive Media Arts (PIMA) and Creative Writing. Grubbs has released numerous solo albums and is known for his cross-disciplinary collaborations with writers such as Susan Howe and Rick Moody, and with visual artists such as Anthony McCall, Angela Bulloch, and Stephen Prina. He was a member of the groups Gastr del Sol (with Jim O'Rourke), Bastro, and Squirrel Bait, and has performed with the Red Krayola, Will Oldham, Tony Conrad, Pauline Oliveros, and Loren Connors, among many others. His work has been presented at, among other venues, the Solomon R. Guggenheim Museum, MoMA, the Tate Modern, and the Centre Pompidou. He is a grant recipient from the Foundation for Contemporary Arts, a contributing editor in music for BOMB Magazine, a member of the Blank Forms board of directors, and director of the Blue Chopsticks record label. 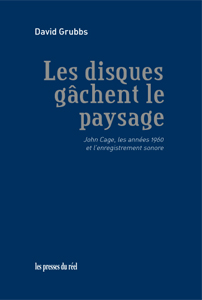