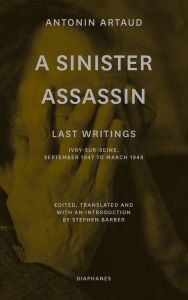 pre-order
wishlist
Edited, translated and with an introduction by Stephen Barber, A Sinister Assassin illuminates Artaud's last, most intensive and terminal work for the first time.
A Sinister Assassin presents translations of Antonin Artaud's largely unknown final work of 1947–48, revealing new insights into his obsessions with the human anatomy, sexuality, societal power, creativity and ill-will. Artaud's preoccupations are seminally those of the contemporary world. Those last writings form the most extraordinary element of Artaud's entire prolific body of work—and is the element now most enduringly inspirational, for artists, filmmakers, musicians, writers, choreographers, and others inspired by Artaud, through their fiercely exploratory, extreme and combative forms.
Artaud's last conception of performance of 1947–48—following his Theatre of Cruelty provocations of the 1930s, and finally incorporated into fragmentary writings and drawings as well as into sonic experimentation in screams and percussion—is that of a dance-propelled act of autopsy, generating the 'body without organs' which negates malevolent microbial epidemics. This book assembles Artaud's crucial writings and press interviews from September 1947 to March 1948, undertaken at a decrepit pavilion in the grounds of a convalescence clinic in Ivry-sur-Seine, on the southern edge of Paris, as well as in-transit through Paris's streets.
Drawing from extensive consultations of Artaud's manuscripts, and from many original interviews with his friends, collaborators and doctors of the 1940s, this book brings together translations of all of the many manifestations of Artaud's final writings: the contents of his last, death-interrupted notebook; his letters; his two final key texts; his glossolalia; the magazine issue which collected his last fragments; and the two extraordinary interviews he gave to national newspaper journalists in the final days of his life, in which he denounces and refuses both his work's recent censorship and his imminent death.
French dramatist, poet, essayist, actor, and theater director Antonin Artaud (1896-1948) is one of the seminal figures of twentieth century writing, art and sound experimentation, known especially for his work with the Surrealist movement, his performance theories, his asylum incarcerations, and his artworks which have been exhibited in major exhibitions, at New York's MoMA and many other art-museums.
pre-order wishlist
Edited, introduced and translated from the French by Stephen Barber.
2023 (publication expected by 2nd quarter)
English edition
11,8 x 19 cm (softcover)
120 pages
15.00 €
ISBN : 978-3-0358-0356-3
EAN : 9783035803563
forthcoming