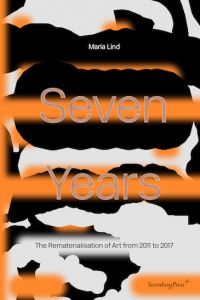 order
An anthology of texts on contemporary art during the second decade of the twenty-first century.
Seven Years offers a subjective chronicle of contemporary art during the second decade of the twenty-first century, seen through a series of columns by curator, writer, and educator Maria Lind. Writing for the print edition of ArtReview, Lind considers individual artworks and exhibitions and contributes to conversations and debates developing in the art world and beyond. She explores work by Haegue Yang, Hassan Khan, Uglycute, Tania Perez-Cordova, and Walid Raad, among others, and discusses such exhibitions as dOCUMENTA (13), the Sharjah Biennial 12, the 3rd Ural Industrial Biennial, and several editions of the Venice Biennale.
Lind's writings are accompanied by other texts: artists Goldin+Senneby discuss Lind's materialist approach through the use of the word “hand” in the introduction to the volume; Sofía Hernández Chong Cuy reflects on how writing can affect curatorial work, and vice versa; artist Ahmet Öğüt conducts an imagined interview with Lind; and Philippe Parreno weaves a summary of the years between 2010 and 2018, highlighting the notion of potentiality. A postscript by Lind's fellow curator Joanna Warsza compiles a glossary of the book's key ideas and terms.
Maria Lind is a curator and writer based in Stockholm. She was the director of the graduate program at the Center for Curatorial Studies, Bard College, 2008 to 2010. She was director of Iaspis in Stockholm 2005 to 2007 and from 2002 to 2004 was the director of Kunstverein München. From 1997 to 2001, Lind was curator at Moderna Museet in Stockholm, where she was responsible for Moderna Museet Projekt. She was co-curator of Manifesta 2 in 1998. Lind has contributed widely to magazines and other publications, as well as to numerous exhibition catalogues. She was the 2009 recipient of the Walter Hopps Award for Curatorial Achievement.
order
Contributions by Goldin+Senneby, Sofía Hernández Chong Cuy, Ahmet Öğüt, Philippe Parreno, Joanna Warsza.