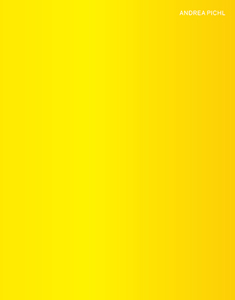 order
wishlist
New monograph: an overview of Andrea Pichl's sculptural, drawn and photographic work, with four essays.
“There is an inner logic to the appearance of spolia in Pichl's work: significant fragments from the past but also the present, fragments both ideal and real, staged anew, interacting with each other. Here the twentieth and twenty-first centuries permeate each other. We hear both the echo and the new sound. In this way, Pichl's spolia also reveal the ambivalence of form and its often helpless dream of beauty, which so frequently comes to an ugly and brutal end. What remains is the dogged, antagonistic persistence of a utopia of form, one no longer unbroken and expressed with a particular irony. Anything else would not be a solution. So come along, and don't forget that art has its aim in sight: the point is … to make reality impossible.”
—Alexander Cammann
Using materials from the modern built environment—plaster, timber, plywood, wallpaper, chipboard, aluminum—Andrea Pichl (born 1964 in Haldensleben, Germany, lives and works in Berlin) creates impressive installations and constructions that bring to the fore architectural details and peculiarities that are often overlooked. Her work engages with and questions utopian ideals associated with Brutalist architecture or prefab housing developments in places such as Berlin, Taskent, Paris, Dublin, and London. Using photographs as a starting point, Pichl analyzes spaces, abstract forms, or banal objects—a chair, a corner, a flowerbox, a balcony—traces left behind or embedded into the layers of concrete and timber found in public plazas, GDR Plattenbau housing complexes, and most recently Berlin's Alexanderplatz.
Drawing on specific architectural elements, Pichl reduces these in scale and reconstructs or reimagines them into something else. By doing so, the Berlin-based artist brings to light social visions associated with design and building, and discloses the tenuous nature of our own surroundings. Pichl's work reflects on the gap between the imagined future and the reality that occurred, revealing a correspondence, a synthesis between people and place where all time merges in the contours of design and material.
order wishlist
Texts by Alexander Cammann, Christine Nippe, Susanne Prinz, Marc Wellmann.
published in June 2019
bilingual edition (English / German)
23,5 x 30 cm (softcover)
122 color & 4 b/w ill.
29.00 €
ISBN : 978-3-95679-469-8
EAN : 9783956794698
in stock
Andrea Pichl: other title