In The Forest (vinyl LP) 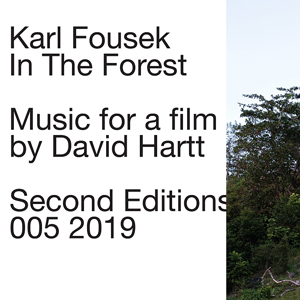 order
Serving as a score for David Hartt's film of the same name about the Habitat Puerto Rico project by Moshe Safdie, In The Forest finds Karl Fousek at his most focussed and controlled.
These five pieces/chapters move with precision and intent. With subtlety and curiosity. Shrouded in ambiguity. And while Fousek works much more restrained here than on previous releases, by paying attention to every detail, he creates an intruiging work of sonic storytelling.
Artwork features images from In The Forest by David Hartt, 2017.
Commissioned by The Graham Foundation for Advanced Studies in the Fine Arts, Chicago.

Audio samples: https://retail.morrmusic-distribution.com/release/C999/karl-fousek/in-the-forest
Karl Fousek (born 1984, lives and works in Vancouver, British Columbia, Canada) is a musician and composer. His works explore the sonorities of electronic sound synthesis algorithms, analog and digital, in a variety of contexts: from improvised music, to generative composition, to drone and minimalism. As a performer he is committed to the pursuit of a truly “live” electronic music, participating in both concerts for solo synthesizer and in group improvisations alongside electronic and acoustic instrumentation.
His music has been published internationally on labels such as Second Editions (DE), Dinzu Artefacts (US), Mondoj (PL), an others; and he has been featured in concert at MUTEK, Cluster New Music + Integrated Arts Festival, The Banff Centre, Sounds Like Audio Arts Festival, Vector Festival, and elsewhere. As collaborator Karl Fousek has worked with musicians Roger Tellier-Craig, Yves Charuest, and Nicolas Caloia; artist David Hartt; and filmmaker Dan Brown amongst others. As an educator he has given lectures and workshops on sound synthesis, performance, and algorithmic composition at Parsons School of Design, Université de Montréal, and many of the festivals at which he also performs.
order
published in May 2019
20.00 €
in stock

In The Forest (vinyl LP)