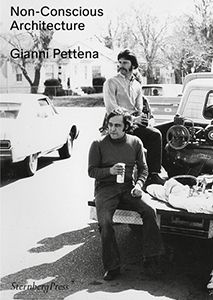 wishlist
This publication surveys the work of Italian critic, architect, and visual artist Gianni Pettena. Focusing on a rich ten-year period of production that began in the mid-sixties, it brings new attention to the artistic and intellectual practice of a figure known primarily as one of the main exponents of the Radical Architecture movement.
International curators and writers consider a span of projects about landscape and the built form as well as objects and works documenting Pettena's interests in labor, temporality, action, and the event. Published on the occasion of the exhibition “About Non-Conscious Architecture” at Galleria Giovanni Bonelli, Milan, 2017, the book also contains a republished conversation between Pettena and artist Robert Smithson and an illustrated index detailing the trajectory of Pettena's body of work and research.
Published following the exhibition “Gianni Pettena – About Non-Conscious Architecture” at Galleria Giovanni Bonelli, Milan, from January 12 to February 24, 2017.
Architect, artist and critic, professor of the History of Contemporary Architecture at the University of Florence and of Planning at California State University, Gianni Pettena (born 1940 in Bolzano) belongs to the original group—along with Archizoom, Superstudio and UFO—of radical Italian architecture. Without denying his background in architecture, he was convinced of the need to rethink the meaning of the discipline, just like the other “radicals”, using the languages of “spatial” research of Conceptual Art and American Land Art, instead of the traditional languages of architectural planning. This tendency emerges from the publication L'anarchitetto and from the performance-declaration Io sono la spia. As a critic and architectural historian, he readdressed the themes of “radicalism” in the exhibition “Radicals. Architettura e Design 1960-1975” at the Venice Biennale of Architecture in 1996 and in the exhibitions “Archipelago” (1999) and “Radical Design” (2004). He has also written on funk architecture, on radicalism, on “spatial” artistic research, as well as design and architecture.
wishlist
Edited by Marco Scotini.
Contributions by Pierre Bal-Blanc, Adam Budak, Luca Cerizza, Émile Ouroumov, Marco Scotini, Elisabetta Trincherini, conversation between Gianni Pettena and Robert Smithson.