Goodbye, World! – Looking at Art in the Digital Age 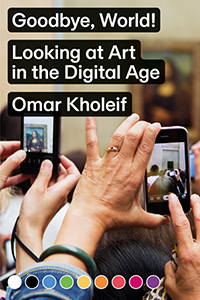 “Goodbye, World! weaves through digital cultures, illustrating how both life and art have changed in the twenty-first century. Omar Kholeif's critical eye is as alert to the issues facing artists as it is to those confronting the contemporary viewer.”
—Sofia Victorino, Daskalopoulos Director of Education and Public Programmes, Whitechapel Gallery

“Omar Kholeif's insightful new book, built upon knowledge accumulated from research and practice, distills a fast-moving world mired with image overload, where the continuous reproduction of popular, or indeed viral images, contrary to general belief, can in itself offer a refreshing experience and hold an intrinsic value of its own. With Goodbye, World!, Kholeif has emerged as one of the leading contemporary historians of the digital age.”
—Sultan Sooud Al Qassemi, Director's Fellow at MIT Media Lab, founder of Barjeel Art Foundation

“Through deft juxtapositions of image, text, and digital detritus, Kholeif presents a visceral take on the strange implications of a world in which images, politics, subjectivities, and affects are recombined in a post-internet era. An Arcades Project for the twenty-first century.”
—Trevor Paglen, artist

“Omar Kholeif pushes forward our rapidly evolving understanding of contemporary art in the digital age. Goodbye, World! is an essential survey of the widening field of digital forms and formats and the growing number of artists that give this art its expression. Moreover, it is a fresh and necessary exploration of the very ontology of the work of art that digital movements force us to reevaluate.”
—Ken Stewart, Assistant Dean and Director of Communications and Public Programs, Harvard University Graduate School of Design
Omar Kholeif (born in Cairo, lives and works in Chicago and London) is a writer, curator, editor, and broadcaster. He has written extensively on art in a global context, focusing on art that intersects with the Internet, as well as works of art from emerging geographic territories that have yet to be seen in the mainstream. He is the author and or editor of over two-dozen books and his writing has appeared in The Guardian, Wired, frieze, and Artforum, Mousse, among numerous publications. Media organs such as, The New York Times, BBC, Financial Times, The Wall Street Journal, GQ, The Economist, The Art Newspaper, Vice, The New Scientist, and others, have profiled his work.
order wishlist
Graphic design: Zak Group.
published in June 2018
English edition
13 x 19,5 cm (softcover)
212 pages (195 color ill.)
22.00 €
ISBN : 978-3-95679-309-7
EAN : 9783956793097
in stock