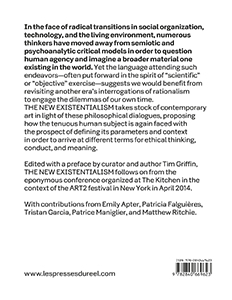 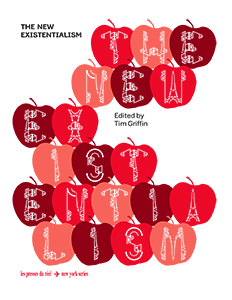 order
wishlist
This reader brings together American and French scholars to discuss the recent paradigmatic shifts from anthropocentric theories toward new models of realism, objectivity, and even metaphysics, occurring in the realm of contemporary art and philosophy—with the school of thought called New Existentialism as a guiding topic.
In the face of radical transitions in social organization, technology, and the living environment, numerous thinkers have moved away from semiotic and psychoanalytic critical models in order to question human agency and imagine a broader material one existing in the world. Yet the language attending such endeavors—often put forward in the spirit of “scientific” or “objective” exercise—suggests we would benefit from revisiting another era's interrogations of rationalism to engage the dilemmas of our own time.
The New Existentialism takes stock of contemporary art in light of these philosophical dialogues, proposing how the tenuous human subject is again faced with the prospect of defining its parameters and context in order to arrive at different terms for ethical thinking, conduct, and meaning.
Edited with a preface by curator and author Tim Griffin, The New Existentialism follows on from the eponymous conference organized at The Kitchen in the context of the ART2 festival in New York in April 2014.
The book is part of the New York series, created conjunctively by Les presses du réel and the French Cultural Services in New York to publish theoretical texts in English not only on contemporary art but also on dance, and on emerging American performance that is more in line with French thinking. The series is inspired by a simple assumption: that contemporary culture is a public good that offers perspective on the questions of our time. Today, contemporary art is increasingly merchandised and yet undervalued in its capacity to give new perspective on the globalized world in which we live. Keeping up with international debates, this series attempts to support that budding perspective.
order wishlist
Edited by Tim Griffin.
Preface by Tim Griffin.
Contributions from Emily Apter, Patricia Falguières, Tristan Garcia, Patrice Maniglier, Matthew Ritchie. 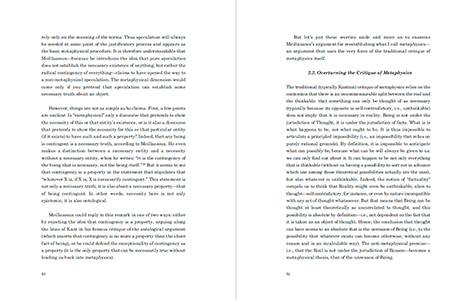 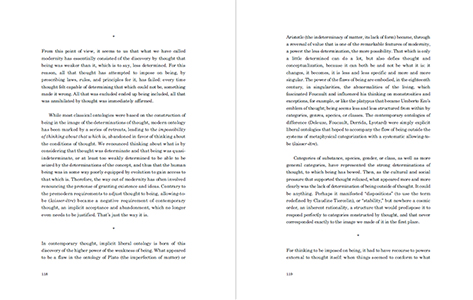 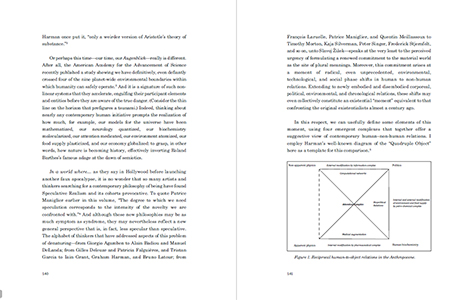