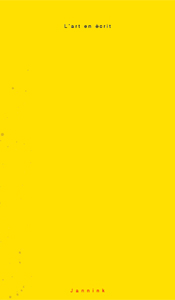 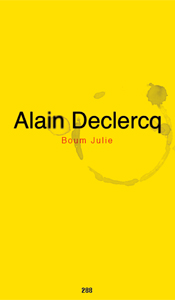 order
wishlist
Alain Declercq, who usually transposes crime fiction into the visual arts field, changes his method of operation and publishes his first thriller (the limited edition of the book is accompanied with an original artwork signed by the artist).
Alain Declercq's works come from the every day life, from a kind of paranoia which drive him to take an interest in powers and laws. His text, published by Jannink, is the first whodunit in the "L'art en écrit" series. In accordance with Niki de Saint-Phalle, Chris Burden or Jacques Monory, he presents a protesting work, acting on facts and reality's objects, commuting thriller into the field of fine art. The author, more accustomed to express himself into visual art, changes his process but keeps this every day's violence he shows diligently. With Boum Julie, he involves us into a counter-intelligence tale, in witch conspiracies, violence, murders and weapons rule the roost. And when you know that, in 2005, the anti-terrosrist squad assaulted his workshop, thinking taht he where a member of Al Quaida, we can wonder where the fiction stops and where beggins reality.
Limited edition of 285 numbered and signed copies.

Also available in regular edition.
Alain Declercq (born 1969 in Moulins, France, lives and works in Paris and New York) has managed to impose his work on the art scene by asserting a praxis where manipulation of the visible becomes the object of perceptive intrigue. Installations, photographs, drawings, and films are all means of exploring the languages of power and the forms of oppression they give rise to. With wit, and often with irony, Alain Declercq toys with forms of security-related schizophrenia, like surveillance systems. To worry reality, and reveal systems, every manner of strategy is offered: shadowing, infiltration, and investigation. All techniques stemming from the spy novel which Alain Declercq calls upon again in his pieces, as he does for exhibition arrangements themselves.
order wishlist
published in June 2012
12,5 x 21 cm (softcover, dust jacket)
48 pages + inserted artwork
200.00 €
in stock
press releases
Le Journal des arts, Christophe Domino, 2012 (JPG) 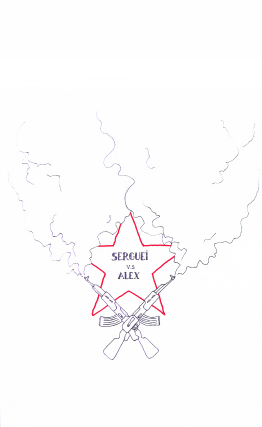