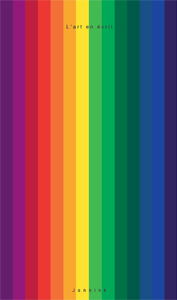 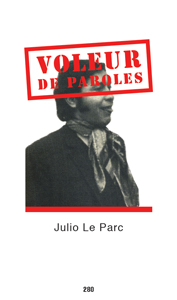 order
Julio Le Parc scratches the various actors of the art world (book accompanied with an original artwork signed by the artist).
Engaged artist, Julio Le Parc took part, in 1960, in the foundation of the GRAV (Research Group for Visual Art), which embodies, shapes, organizes and develops the confrontation of ideas and experiences and is composed of eleven artists. In addition to the exhibitions and other Labyrinths that it designs, the GRAV publishes, throughout its existence, challenging texts about the art world. On the occasion of the Paris Biennale in 1961, is launched the manifesto "Enough mystifications" that takes violently appart the "official art".
In Voleur de paroles, Julio Le Parc comes back on this text, slipped into the skin of imaginary commentators : the critic, the failed artist, the merchant... scratching again and as usual the various actors of the art world.
Limited edition of 285 numbered and signed copies.