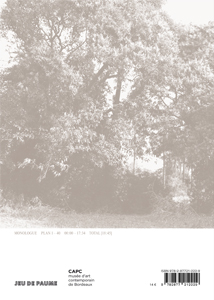 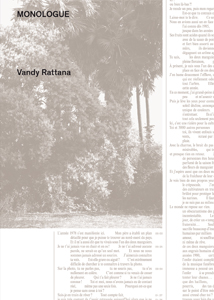 order
wishlist
A “monologue” by the Cambodian photographer who offers an intimate reflection on the traumas of the recent history of his country.
With Monologue, Vandy Rattana intimately confronts particular physical and physiological scars remaining from the Khmer Rouge era. The only sound in the film—the artist's voice—is directed at the sister he never met, who rests somewhere beneath a small, measured plot of land, alongside his grandmother, and five thousand others who were discarded during the Khmer Rouge regime in 1978 in Cambodia. When violence can no longer be seen, Vandy complicates our perception of its aftermath with intimacy. What is reconciliation? Monologue destabilizes time, the distance of history, bipolar ideas of justice, the possibility of logic, and of peace.
Published on the occasion of the eponymous exhibitions at the CAPC musée d'art contemporain de Bordeaux, January 22 to May 3, 2015, and at the Jeu de Paume, Paris, February 24 to May 27, 2015.

The Jeu de Paume's Satellite program devoted to contemporary art was initiated in 2007. In 2015, the Jeu de Paume and the CAPC musée d'art contemporain de Bordeaux are jointly organizing the eighth in this series of exhibitions, which from the outset have been entrusted to curators of international renown (Fabienne Fulchéri, María Inés Rodríguez, Elena Filipovic, Raimundas Malašauskas, Filipa Oliveira, Mathieu Copeland and Nataša Petrešin-Bachelez). The latest series, called “Enter the Stream at the Turn” and curated by Erin Gleeson, highlights select practices in Southeast Asia through four solo exhibitions featuring the artists Vandy Rattana (Cambodia), Arin Rungjang (Thailand), Khvay Samnang (Cambodia) and Nguyen Trinh Thi (Vietnam). Their channels of resistance involve the moving image realized both within and against a complex inheritance of cultural and historical occupation and censorship. Each exhibition is accompanied by a publication that was conceived as a carte blanche for the artists. This series of books, each of which was created in close collaboration with a graphic design agency, forms an independent artistic space within the Satellite program.
Vandy Rattana (born 1980, Phnom Penh, Cambodia) began photographing as a form of historical continuity, concerned with the lack of physical documentation of unofficial stories and monuments unique to his history and culture. His early serial works straddled the line between strict photojournalism and conceptual practice, and shared a preoccupation with the everyday as experienced by the average Cambodian. Whereas his early works chronicled the contemporary moment while creating a more comprehensive archive for future generations, his recent work critiques historiography by pivoting toward fiction. Vandy's recent solo exhibitions include “Bomb Ponds,” Asia Society, New York City (2013) and “Surface,” SA SA BASSAC, Phnom Penh (2012). Recent group exhibitions include “Die Roten Khmer und die Folgen” [The Khmer Rouge and the Consequences], Akademie der Künste, Berlin (2015), “In the Aftermath of Trauma: Contemporary Video Installations,” Mildred Lane Kemper Art Museum, St. Louis (2014), “No Country: Contemporary Art for South and Southeast Asia,” Guggenheim UBS MAP Global Art Initiative, Asia Society, Hong Kong (2013), dOCUMENTA (13), Kassel (2012), and “The Best of Times, The Worst of Times: Rebirth and Apocalypse in Contemporary Art,” Kiev Biennale (2012). Vandy divides his time between Phnom Penh, Paris, and Taipei.
order wishlist
Texts by Erin Gleeson and Vandy Rattana. 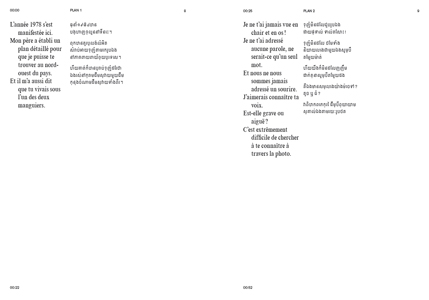 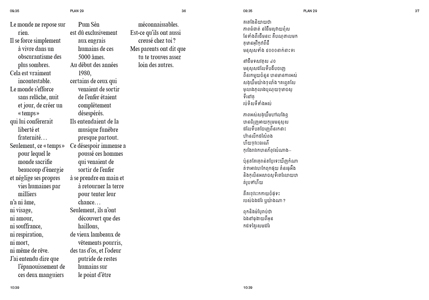