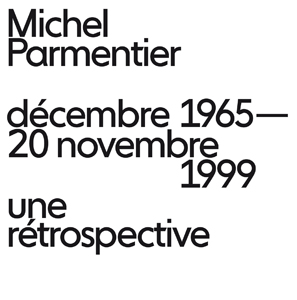 order
wishlist
Reference monograph on the singularly radical work of Michel Parmentier—an important addition to the history of painting in the second half of the 20th century.
Also available in English edition.
Michel Parmentier (1938-2000) was awarded the Lefranc Prize in 1963, at a time when his works featured regularly at the Salon de la Jeune Peinture and at the Biennale de Paris.
In October and November 1965 Parmentier, who had rejected any kind of expressive and signifying representation, achieved a first way of making figure and ground wholly cohere by making irregularly painted horizontal bands on stretchered canvas alternating white and one of various colours, roughly painted and delimited using masking tape. These works are considered as part of the process leading to the gradual development of Parmentier's pliage technique.
During the month of December 1965, Parmentier adopted the radical method of pliage (folding), inspired by Simon Hantaï, which now became his exclusive approach to painting. Horizontal strips in a single colour, 38 centimetres wide, alternated with strips of equal width that had been protected from the paint by folding. When the support was unfolded, it thus revealed an alternation of painted and unpainted strips. Parmentier pursued this method tirelessly, right up to his last work, on transparent polyester, dated 20 November 1999.
From late 1965 to 1968, Parmentier applied this approach with a different, arbitrarily chosen colour each year: blue in 1966, grey in 1967, red in 1968. These works had their date of execution stamped on the back. This inscription serves as their title.
In 1966 Parmentier exhibited mainly alongside Daniel Buren. Throughout 1967 he exhibited with Buren, Mosset and Toroni as part of the group known as BMPT, which came to attention for its public actions. At the end of the year Parmentier issued a tract stating that “The Group Buren – Mosset – Parmentier – Toroni no longer exists.”
Parmentier himself stopped painting later in 1968.
However, when he was invited to feature in the exhibition “Douze Ans d'art contemporain en France 1960-1972,” at the Grand Palais, Parmentier did agree to show one canvas each for the years 1966, 1967 and 1968, while publishing in the catalogue an “open letter” to the show's curator, François Mathey, in which he set out his reasons for agreeing to exhibit his “objectively subversive” work and concluded that “cessation of activity is a form of subversion that cannot be recuperated.”
In 1978 he exhibited three canvases (1966, 1967, 1968) at Galerie Liliane & Michel Durand-Dessert, while an asterisk on the invitation signalled the caveat that “Michel Parmentier gave up painting for good in the course of the year 1968.”
In September 1983, after fifteen years of interruption, he resumed painting, taking up where he had left off. “I have definitively stopped painting. Which means very exactly that I can go back to it without having to explain myself.” He began making canvas in black and white similar to the earlier ones, keeping this up for two years.
In April 1986 he started work on a series on paper and tracing paper, again using the folding technique, applying graphite, rubbed charcoal and repeated swathes of white or grey pastel and white oilstick on a variety of supports, on which gradually the trace made is identified with its erasure and tends to disappear. In September–October 1988, the Centre National des Arts Plastiques put on a show of his work (curator: Alfred Pacquement) and published the first monograph about the artist.
In April 1990 Michel Parmentier and Daniel Buren co-signed a text – published in the catalogue for the exhibition “Individualités: 14 Contemporary Artists from France” (Toronto, Art Gallery of Toronto, 1991) – which provoked anger in the French art world by attacking the idea of uniting anyone under the national banner. In June–July 1991, at the Palais des Beaux-Arts in Brussels, he exhibited with Buren again and, to accompany this event, they published Propos délibérés, a set of interviews with Anne Baldassari. Parmentier left the Michel Durand-Dessert gallery after a disagreement over this publication.
Up to 1998 he made regular trips to Brussels, where his friend, the painter Guy Massaux, gave him the run of his studio space.
In 1995, at Massaux's initiative, a number of collectors mobilised to support Parmentier's work, and two years later an exhibition was held at the Marconi studio in Brussels (19 April 1997) featuring three of his pliages. It was in this studio that Bernard Bloch shot the film 304 x 308 cm (Presque le silence) (1995).
In 1994, at the initiative of Marie-Odile Van Caeneghem and Agnès Foiret, who wrote the critical text in the catalogue, Parmentier exhibited a series of works at the Carré des Arts, Paris, done on polyester transparencies. This was a support he began working with in March 1993.
In November 1999, during an exhibition at the Kunstcentrum in Sittard (Netherlands), “Tegenvleug / à rebrousse-poil” (curators: Luk Lambrecht and Guy Massaux), he executed and exhibited on-site what would stand as his last work: 20 novembre 1999. This exhibition also featured an exceptional loan, Tabula (1982-1986) by Simon Hantaï, which was then the artist's last painted work.
Michel Parmentier died in Paris in June 2000, à Paris.
order wishlist
Edited by Guy Massaux. – Association Michel Parmentier, AMP – Fonds Michel Parmentier, Brussels.
Texts by Philip Armstrong, Robert Bonaccorsi, Agnès Foiret, Guy Massaux, Jean-Marc Poinsot. 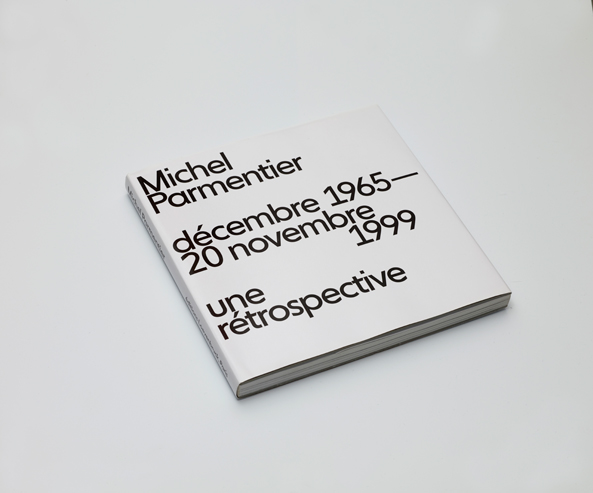 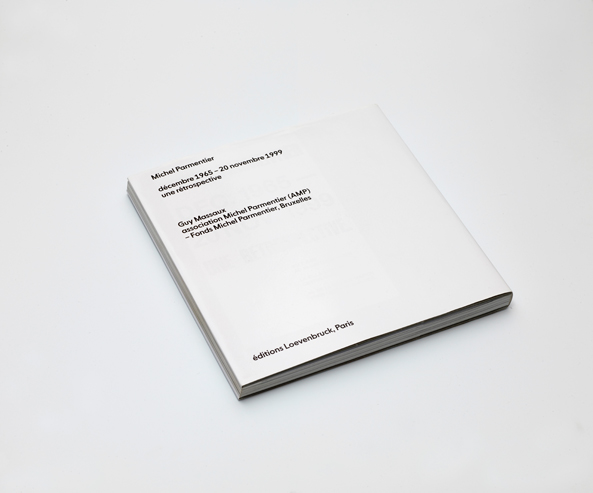 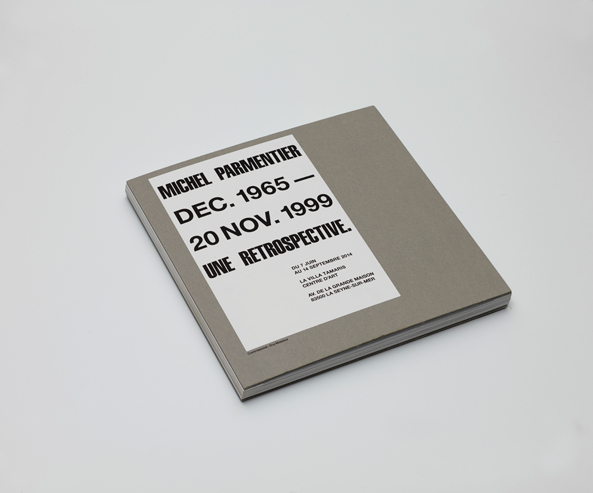 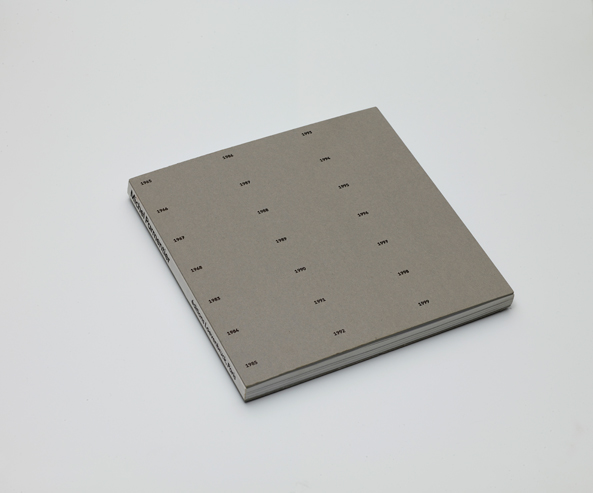 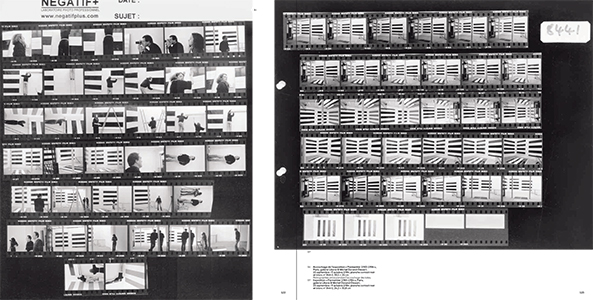 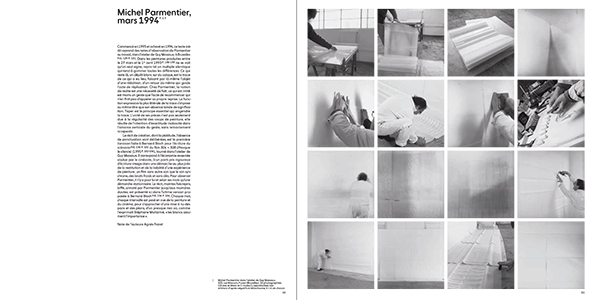 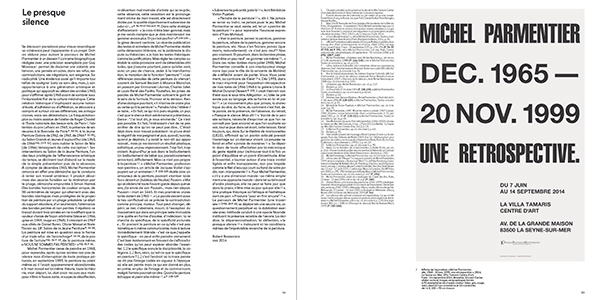 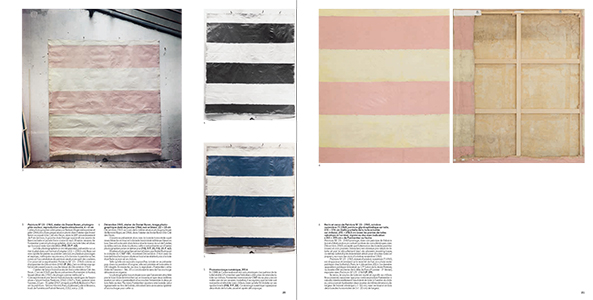 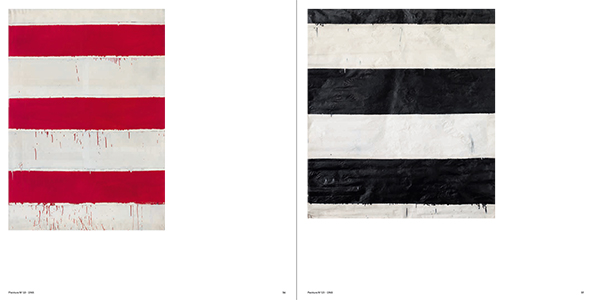 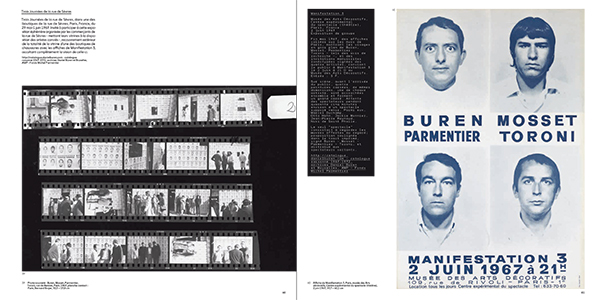 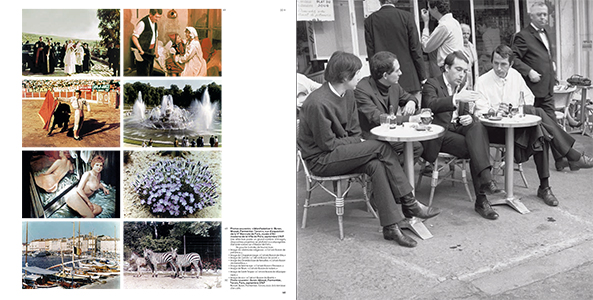 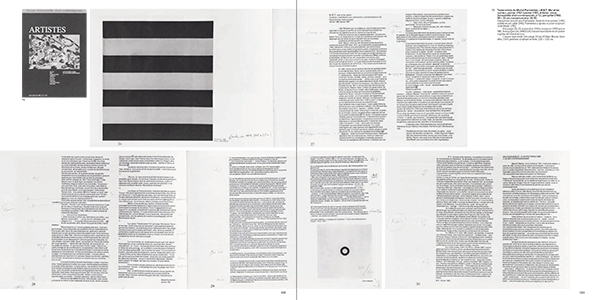 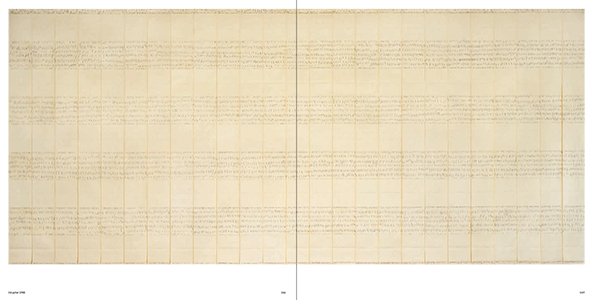 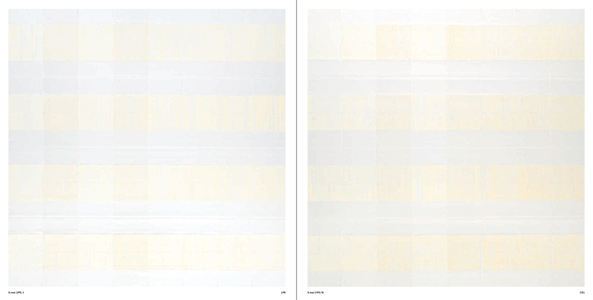 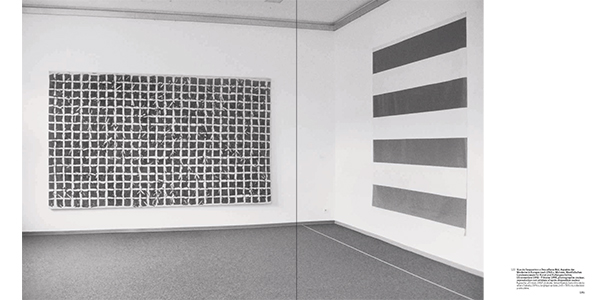 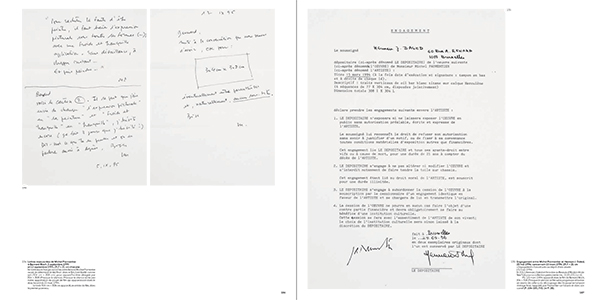