Coline Sunier & Charles Mazé are Swiss and French graphic and type designers. They lived in the Netherlands, Belgium, and Italy from 2008 to 2018, and are now based in France (Marseille and Paris). They were fellows at the French Academy in Rome—Villa Medici in 2014-2015, and are now graphic designers in residency at CAC Brétigny and CRAC Alsace. Charles is part of the teaching staff of Atelier National de Recherche Typographique (ANRT) in Nancy and Coline of Institut supérieur des arts de Toulouse (isdaT). They cofounded the publishing structures <o> future <o> in 2009 and ABCDEFGHIJKLMNOPQRSTUVWXYZ in 2020. 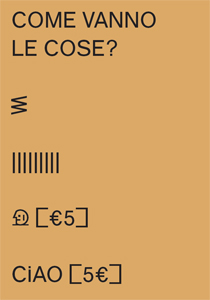